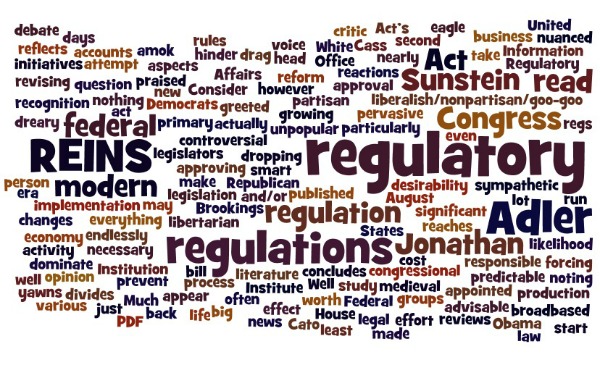 I should have noted this a couple of days ago, but praise is due to the U.S. House of Representatives for this week’s passage of the REINS (Regulations from the Executive in Need of Scrutiny) Act to bring greater accountability to federal government regulations. Full story here.  (The REINS Act: It “REINS” in the regulatory process! Get it? Huh? HUH? GET IT?! Ugh, what a tortured acronym.)

Credit where due: Rep. Tim Griffin, Republican of Arkansas’ Second District, is a co-sponsor of the REINS Act and has been kicking some ass in taking the fight to the regulators. This somewhat offsets my previously published annoyance at his being a supporter of the rotten SOPA Internet censorship bill (BOOOOOOOOOO!!!). Somewhat.

Anyway, all the Arkansas House Republicans (Griffin, Rick Crawford, Steve Womack) voted for the bill, while lone Democrat Rep. Mike Ross voted against. Now it goes to the Democratic Senate, which probably means it’s pretty much dead for now, so I guess that was a lot of fun.

To read the reactions from the bill’s Democratic opponents in news accounts, you might gather this proposal is a GOP attempt to drag the United States back to the medieval era, forcing you to drink poisoned Vitamin Water and your children to work in a coal mine. The reality is that it would bring a modest amount of needed accountability to the regulatory process by requiring Congress to approve or reject, without changes, particularly costly or burdensome executive rules and regulations (i.e., those with an economic impact of $100 million or more).

For a more nuanced take on just what the REINS Act would do, read this study by smart law person Jonathan Adler published by the libertarian Cato Institute (PDF). Adler reviews the literature and concludes:

Federal regulation reaches nearly all aspects of modern life and is pervasive in the modern economy. Much of this regulation may be necessary or advisable, and nothing in the REINS Act would hinder a sympathetic Congress from approving new federal regulations. In all likelihood, however, the REINS Act’s congressional approval process would prevent the implementation of particularly unpopular or controversial regulatory initiatives. The primary effect of the legislation would be to make Congress more responsible for federal regulatory activity by forcing legislators to voice their opinion on the desirability of significant regulatory changes.

Well said, Jonathan Adler! In addition, this recent piece on the bill from Reason.com explores the pressing question, “Should voters have more voice in the regulatory process?” (SPOILER ALERT: Yes.)

I’ll note that, while the debate over regulatory reform often reflects the dreary and predictable partisan divides that dominate, well, everything these days, the recognition that the regulatory process is burdensome and costly has actually become more broadbased.

Consider: Obama appointed legal eagle Cass Sunstein, a critic of endlessly growing rules and regs, to head the White House Office of Information and Regulatory Affairs. Sunstein made a big production in August of  dropping and/or revising various regulations. This effort was praised by the liberalish/nonpartisan/goo-goo Brookings Institution, where they noted that regulatory reform would spur private sector job growth, even if it was greeted with yawns by a lot of business groups. But at least it was a start. The question is, will there be a second act?

Also: Arkansas’ own former Sen. Blanche Lincoln, a Democrat, is heading up the Small Businesses for Sensible Regulation coalition. So perhaps there is common ground for Democrats and Republicans, liberals and conservatives, to come together to head off this onerous burden of an ever-growing mountain of government rules and regulations, yes? Yes? No? OK, I’ll be over here, not holding my breath.

Should voters have more say in the regulatory processes that drastically affect their lives? (Reason.com)

One thought on “Taking the REINS: Getting a Handle on Runaway Government Regulations”