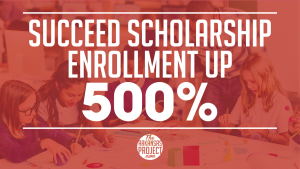 Student enrollment in the state’s school voucher program has more than quintupled as the second academic year of its existence begins.

The Succeed Scholarship is the first school voucher program to be established in the Natural State. The law establishing the program was passed into law in the 2015 legislative session.

The law gives parents of children with special needs a scholarship to attend a private school. The 2016-2017 school year was the first academic year students were able to benefit from the program.

The Arkansas Department of Education partners with The Reform Alliance, a local education non-profit organization, to run the program.

Enrollment in the program was capped at 100 students last year. That cap expired earlier this year.

Laurie Lee, a board member on The Reform Alliance, told The Arkansas Project in an interview Tuesday afternoon that enrollment in the program was up over 500 percent since this time last year.

We have over 150 students enrolled as of two weeks ago. We have funding for 164 students and we’ve turned in a lot of applications in the past two weeks. There were 23 students enrolled at this time last year. By the end of school year we had 62. For 2017-2018 we have over 150 so far and we still have room. The cap was just for the first year. The only thing we are restricted for now is the budget.

Lee said schools participating in the scholarship program had increased to 29 schools for the 2017-2018 academic year.

Lee credited legislative changes made earlier this year for the increase in school participation.

Act 327 allowed schools which are in the process of becoming accredited to be eligible to receive students through the Scholarship. Act 894 allowed students who are in a foster group home to be eligible for the Succeed Scholarship, whether or not they have special needs. Act 637 allowed families to request a waiver of the one-year public school requirement. This waiver can be granted by the resident school district’s superintendent.

Valerie Pruitt, executive director of The Reform Alliance, said she was pleased with the growth of the program for its second academic year.

We’re pleased about our ability to communicate to the community that these scholarships are available. If you have that many applicants, it shows there is a need out there for this scholarship program. We’re hoping in the next session that we’ll be able to get more funds to help more families.

While it’s still early in the new school year, it’s clear that more Arkansas students and parents will be able to find schools that best fit their needs with the help of the Succeed Scholarship.

Hopefully, this is a sign of things to come for school choice in Arkansas.