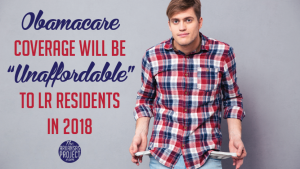 Obamacare coverage will likely be unaffordable — by the law’s own definition — for many middle income families in Little Rock in 2018.

According to a new study by eHealth, a family of three in Little Rock that earned too much income to qualify for the law’s subsidies will need to increase their annual income by more than $21,000 next year for the cheapest Obamacare plan to be considered “affordable.”
The study found the same was true for 47 of 50 cities they surveyed nationwide.

Under Obamacare, subsidies are no longer available to consumers who make 400 percent of the federal poverty level — which is around $82,000 for a family of three. Obamacare considers health insurance premiums to be “unaffordable” when the cheapest plan in the market costs more than 8.16 percent of a household’s modified adjusted gross income.

Basically, the study found the Affordable Care Act is only affordable to consumers receiving taxpayer assistance to purchase such plans. If you’re paying the full cost out of your own pocket, it suddenly becomes the Unaffordable Care Act.

According to the study, a family of three in Little Rock earning approximately $82,000 would pay $8,428 in premiums in 2018. The study used an across-the-board 10 percent rate increase in all 50 cities to estimate the 2018 rates.

Arkansas insurers so far have requested rate increases for 2018 from 7.8 percent to as high as 22 percent.

Without any changes in the health care law, it appears that premiums for a middle class family that doesn’t qualify for subsidies is beginning to become like a second mortgage without the house.

You can read the full study here.