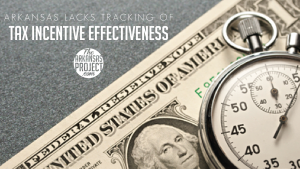 Arkansas is behind most of the nation when it comes to tracking the effectiveness of its tax incentives, according to a recent study by Pew Charitable Trusts.

According to the study, Arkansas legislative auditors were required by law to regularly evaluate the state’s tax incentives as recently as 2013. However, that practice has since been altered to only focus on individual projects that receive incentives.

From 2005 to 2013, the Arkansas Legislative Audit Division was required by law to regularly evaluate the state’s tax incentives. The division contracted with academic economists to measure the impact of the programs. Some of the reports included rigorous analysis but did not present the findings in a way that could easily be understood by policymakers, who found them too technical and abstract to provide valuable guidance. In response, lawmakers shifted the focus of the effort away from evaluating programs to studying individual projects that have received incentives. The reports still yield valuable information but do not provide lawmakers with the policy-level information they need to decide which incentives should be part of the state’s economic development portfolio and what form they should take. One exception is a finding that the audit division included in its 2014 and 2015 reports: that incentives under the InvestArk Program produced weaker returns on the state’s investment than other programs.e That conclusion was notable because InvestArk is the state’s most expensive tax incentive, having cost more than $170 million from 2011 to 2015. Detailed programmatic evaluations could help confirm the audit’s conclusion and offer recommendations for improving the effectiveness of incentive programs.

The study’s authors, Josh Goodman and John Chapman, recommend Arkansas emulate 28 other states that have plans to regularly evaluate the effectiveness of state tax incentives.

More from the report:

If Arkansas re-established a process for evaluation of incentive programs, the state could improve upon the past version in several ways. One option would be for the Legislative Audit Division to build the capacity to measure the impact of incentives in-house. In other states, such as Minnesota, Nebraska, and Washington, legislative auditors have proved that they can effectively evaluate the economic results of incentives. With their work overseen by legislative committees, these offices are often adept at providing clarity to lawmakers about their assumptions, findings, and recommendations. Alternatively, states have had success contracting with outside experts to study incentives when the evaluators receive clear direction on what information will be most valuable to policymakers. For example, an Oklahoma commission identifies the goals of incentives and what evaluations should measure to determine whether those goals have been achieved. Then, the state contracts with consultants to complete the analysis. That way, the consultants are more likely to provide the information lawmakers are seeking.

The legislature made a good first start to this effort by passing legislation repealing the ineffective InvestArk tax credit in the 2017 legislative session. I’m sure there are more ineffective incentives written into the tax code that legislators could end to use for broad-based tax relief for Arkansas taxpayers.

You can read the full Pew study here.