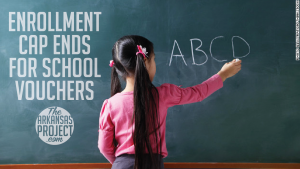 The Succeed Scholarship Program is no longer subject to a cap in student enrollment; it has seen a significant increase in interest for the 2017-2018 academic year.
The Succeed Scholarship is the first school voucher program to be established in the Natural State. The law establishing the program was passed into law in the 2015 legislative session.

The law gives parents of children with special needs the ability to send their children to the school that best meets their unique circumstances. The 2016-2017 school year was the first academic year students were able to benefit from the program.

For the 2016-2017 academic year, students had to be eligible for special education, must have attended a public school the previous year, and must have been accepted to the private school of their choice.  In order to accept eligible students, private schools must apply and be approved by the Arkansas Department of Education.

The program allows children with special needs or children in a foster group home to receive a scholarship worth up to $6,713 to attend a private school.

The Arkansas Department of Education partners with The Reform Alliance, a local education non-profit organization, to run the program.

Katie Clifford, executive director of The Reform Alliance, said the program won’t be subject to the previous enrollment cap of 100 students for the 2017-2018 school year.

The 100 student cap was just written into the rules, not the law, for this year alone for the 2016-2017 year. By default that cap goes away and we’ll just be limited by funding. The legislature passed a $1.3 million appropriation for us during the session. How much of that gets funded we won’t know until the end of June.

A few changes to the program were made during the 2017 session. Act 327 allows schools who are in the process of becoming accredited to be eligible to receive students through the Scholarship. Act 894 allows students who are in a foster group home to be eligible for the Succeed Scholarship, whether or not they have special needs. Act 637 allows families to request a waiver of the one-year public school requirement. This waiver can be granted by the resident school district’s superintendent. Act 637 has been responsible for a significant increase in student applications, according to Clifford.

The number of private schools eligible to receive students for the 2017-2018 academic year has also increased since the previous academic year.

We currently have 27 schools approved across the state. A majority of our schools are in the population hubs of our state…Little Rock (and) Northwest Arkansas. We also have a significant number of schools in Fort Smith.

Four of the twenty-seven are directly related to changes that were made in the legislative session. The change in the law that allowed schools that are in the process of getting accredited allowed for schools to almost immediately get approved because of where they were in the accreditation process. Those are the schools that are specifically serving these kids with special needs already. We have seen a significant increase in interest in schools that are in similar situations across the state.

For a full list of approved private schools, go here.

According to Clifford, there’s no specific deadline for schools to apply for the coming academic year. However, the deadline for students to apply is at the end of October.