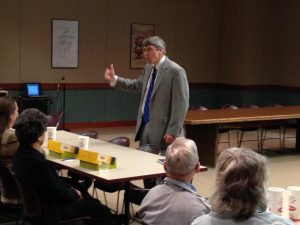 Those thinkers over at the Advance Arkansas Institute made good on their promise yesterday to bring Steve Moore to Little Rock for a speech. And might I just add: it was quite a barn burner.

I’ve provided a video excerpt of Mr. Moore’s comments below. The clip begins with Moore emphatically telling the audience of approximately 100 — which included a large number of state legislators of both parties — about the importance of reforming the tax code in Arkansas.

“If you just stand pat, you’re going to lose ground,” Moore said. “There are 9 states in America that have no income tax…You’re going to hear all of the scare tactics…” But none of the concerns raised in these scare tactics — schools closing, prisons shutting down, elderly people eating dog food — have come to pass in these states that have no income tax. In fact, quite the opposite has occurred: these states are booming in both the public and private sectors. “It’s working big time,” as Moore said.

“You want the best public services you can have…but you can’t have that if you don’t have a state economy that’s flourishing…If you get [tax reform] right, you’ll be able to fund the best schools..best road system…best public safety…the way you create good, first class public service is by having a robust private sector with a pro-business atmosphere.”

I’ll add a hearty “hear hear” and shut up now so you can hear the real genius speak: