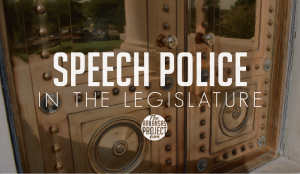 One of the most effective weapons one can wield today against an ideological opponent is the “offense” weapon. I don’t mean an offensive weapon, but weaponizing the notion of “I’m offended.” We saw a key example of that last week in a Senate Education Committee meeting.

In a discussion over a mundane bill to change funding for vocational education, Sen. Kim Hammer made the mistake of using the word “emotions, “ as in, “The numbers are driven by the data and not by emotions, but the reality of the facts of the research.” The point he was apparently trying to make was that the formula in question was data-based, not based on a less reliable standard. For someone under question as to why his proposed change should be adopted, this seems like a necessary point for him to make.

However, Sen. Hammer used the word “emotions” in response to a question by Sen. Linda Chesterfield. Another senator, Joyce Elliott, took offense on behalf of Sen. Chesterfield. She pointed out, with some justification, that in the past women have been dismissed as being too emotional. She chastised Sen. Hammer for using that word, though she allowed that “it’s not just you,” but many men, who dismiss women as emotional.

Unless something is missing in the news reports of this incident, I have a difficult time understanding why a reasonable person would take offense at Sen. Hammer’s words. Hammer did not accuse anyone of being emotional; he simply said that his proposed change was not based on emotion. He addressed Sen. Chesterfield’s question with an explanation that was engaging with her objection, not dismissing it.

Sen. Elliott then chastised Sen. Hammer, saying, “Sen. Chesterfield and I are not here as emotional vessels, and I want you to remember that. Just please try not to ever do it again.”

I’m not sure what “it” is. Was Sen. Elliott referring to the use of the word “emotions”? If so, that seems like a sweeping ban on a word that, until today, did not seem to be offensive. Or was she saying that she did not want Sen. Hammer to dismiss a female senator’s question? If so, then that seems like a strange request because Sen. Hammer was answering, not dismissing, Sen. Chesterfield’s question.

Regardless of what Sen. Hammer said, Sen. Elliott was offended. It does not matter if Sen. Hammer was trying to be sexist; all that mattered was her impression. She then used that as a way to attack Sen. Hammer and, by implication, his proposal. Then she requested that Sen. Hammer not do “it” again, leaving “it” to be determined at a time of Sen. Elliott’s choosing, presumably.

Being offended at something is a subjective thing – it does not depend on an action that is objectively offensive. That’s human, since everyone interprets actions and words through their own experiences. However, to use the state of being offended as a method of attack undermines the very notion of deliberative government. One cannot reason together on policy matters if someone can use their offended state as a trump card to shut down any opposing idea.

I have no idea if Sen. Hammer’s proposed changes to vocational funding is a good one. What I do know is that it – and any idea brought forward in the legislature – deserves to be considered on its merits. Ideas should not be derailed every time someone claims to be offended.