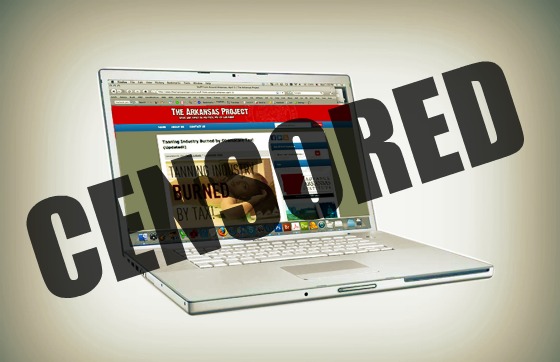 I’ve written previously about my distaste for the Congressional Stop Online Piracy Act (SOPA). Blecch, this SOPA thing—just rotten. It’s a heavy-handed power grab stemming from an unholy alliance between the federal government and big media conglomerates to assert greater authority over the Internet, in the name of copyright protection. But as we’ve seen, it’s rife with potential for abuse.

This lamentable bill is co-sponsored in the House of Representatives by Rep. Tim Griffin, the Republican from Arkansas’ Second District (disappointing, as he’s been shown more commendable instincts on regulatory reform and energy policy). Meanwhile, the Senate version, the PROTECT-IP Act, is co-sponsored by Republican Sen. John Boozman of Arkansas. The House bill is slated for mark-up in the Judiciary Committee, of which Griffin is a member, on Thursday.

The original measure amounted to the holy grail of intellectual property enforcement, as it effectively gave private companies the ability to de-fund websites they alleged to be trafficking in unauthorized copyright and trademark goods — without having to get a judge’s approval.

Under the amended plan (.pdf), which was released late Monday, a judge would have to order ad networks to stop doing business with a site “dedicated” to infringing activities. Under the original proposal, a rights holder could make those demands on an ad network or payment processor and effectively kill off the site.

The amendment, however, still gives legal immunity to financial institutions and ad networks that choose to boycott “rogue” sites.

Lamar’s amendments also clarify that sites ending in .com, .org and .net are not covered by the bill. Only foreign sites fall under SOPA’s wrath.

Yet the amendment still allows the Justice Department to demand that Internet Service Providers, such as AT&T and Comcast, block their customers from visiting infringing sites.

That’s a heartening development, insofar as it suggests SOPA backers recognize the massive head of steam the bill’s opponents have worked up. Clearly, the opposition is making some headway, which means its time to step up the pressure. Noted: Wikipedia founder Jimmy Wales is mulling a complete Wikipedia black-out in protest to raise awareness of the bill. Jesus, these nerds play hardball.

But the fact is that while these amendments are welcome, it doesn’t change the reality that the whole SOPA/PROTECT-IP effort is misguided, at best. Let’s leave it with the Cato Institute’s Julian Sanchez: “But the problem with SOPA and PROTECT-IP isn’t that they need to be tweaked in order to get the details of an Internet censorship system right. There is no “right” way to do Internet censorship, and the best version of a bad idea remains a bad idea.” Yes. Yes. Well said, that.

UPDATE: Via Twitter, our friend Keith Crawford (@tsudo) points us to this story about alternative anti-piracy legislation being floated by Democratic Sen. Ron Wyden of Oregon and Republican Rep. Darrell Issa of California: The Online Protection & Enforcement of Digital Trade (OPEN) Act.

Initial response from some high-profile SOPA opponents, like the Electronic Frontier Foundation, appears positive, if measured. There’s also a helpful website, Keep the Web Open, with a draft of the OPEN Act’s text; comparisons showing how it stacks up to SOPA and Protect-IP; and opportunities for you to sound off, because that’s what you do. Check it out.

3 thoughts on “Someone Drive a Stake Through Heart of the SOPA Internet Censorship Bill, Now! (Updated!)”