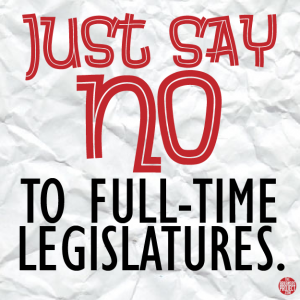 “No man’s life, liberty, or property are safe while the legislature is in session.”
― Mark Twain
This interesting exchange in an Arkansas News article between House Speaker  Jeremy Gillam and a member of the Independent Citizen’s Committee yesterday caught my attention:

Vice Chairman Chuck Banks told House Speaker-designate Jeremy Gillam, R-Judsonia, that most people he has heard from do not want legislative salaries adjusted so as to create a full-time Legislature.“Do you hear that same thing from your constituents?” Banks asked.“No sir, I don’t know that I hear the exact same thing,” Gillam said. “What we hear is a concern (about) the duration of the ability to pass laws and having the sessions, but the service level I hear quite a bit is that they want us here quite a bit.”

I’ve no idea who Gillam has been hearing from on this issue, but it apparently isn’t from people who care about limiting government.
There is a very strong connection between how long and how often a state’s legislature meets and how much that state taxes and spends. Usually, state legislatures that meet more tend to spend more.
According to Ballotpedia, the states with full-time legislatures are California, Illinois, New York, Massachusetts, Michigan, New Jersey, Ohio, Pennsylvania, and Wisconsin.
So if you want Arkansas government to become more like California government, a full-time legislature will get you closer to realizing that dream. On the other hand, Texas only meets every two years — just like Arkansas did until 2008 — and our southwestern neighbor has managed to do just fine without the accompaniment of a full-time legislature.
In short, a full-time legislature would be a nice stimulus package for lobbyists and legislators whose chief concern in public service seems to be improving politicians’ credit scores, but such a change would likely be a detriment to those interested in growing Arkansas’s economy and limiting the size and scope of government in what was once the Land of Opportunity.