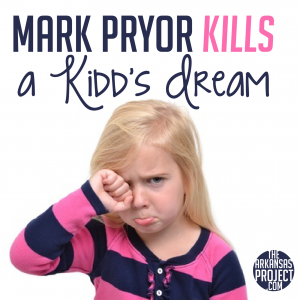 On February 10, 2009, new federal regulations governing lead exposure in children’s products were scheduled to go into effect. One day before that, A Kidd’s Dream — a consignment store in Conway — closed its doors because it couldn’t meet those regulations.
Senator Mark Pryor was the lead Senate sponsor of the Consumer Product Safety Improvement Act (CPSIA). His law killed the small business dreams of Brenda Kidd and Gayla Wade, the owners of A Kidd’s Dream, and hurt many other business owners across the country.
As a consignment store, A Kidd’s Dream resold children’s products. Here is the guidance issued by the Consumer Products Safety Commission to resellers like A Kidd’s Dream:

The new safety law does not require resellers to test children’s products in inventory for compliance with the lead limit before they are sold. However, resellers cannot sell children’s products that exceed the lead limit and therefore should avoid products that are likely to have lead content, unless they have testing or other information to indicate the products being sold have less than the new limit. Those resellers that do sell products in violation of the new limits could face civil and/or criminal penalties.

It’s pretty easy to see why Kidd and Wade decided to close the store rather than deal with the potential civil and/or criminal penalties. Here’s how Walter Olson of the blog, Overlawyered, describes the dilemma facing thrift stores (it could easily apply to resale stores, too):

Thrift store managers, often volunteers themselves, have no way to guess whether every grommet or zipper on a kids’ jacket or ink on an old jigsaw puzzle box or some plastic component of Mom’s old roller skates would pass muster.
“The reality is that all this stuff will be dumped in the landfill,” predicted Adele Meyer, executive director of the National Association of Resale and Thrift Shops. Among the biggest losers if that happens: poorer parents who might start having to buy kids’ winter coats new at $30 rather than used at $5 or $10.

Did the products being sold at A Kidd’s Dream pose a health risk to children? Senator Pryor thinks so. He claims that a major achievement of CPSIA is that “we’ve significantly reduced the amount of lead in toys.” Perhaps, but the amount of lead in toys is only a problem if it leads to elevated lead levels in children. Is there any evidence that lead in toys was a health problem prior to 2008?
If there is, I can’t find it. In 2008, only 0.72% of the children tested for lead exposure had elevated blood levels of lead. That’s down from 0.94% in 2007. In fact, lead exposure had been falling over the previous decade. In 1997, 7.61% of children tested had elevated lead levels. Had lead in toys been harming children, it’s impossible to see why there would have been such a large drop in childhood lead levels in the decade leading up to CPSIA.
Interestingly, since the enactment of the CPSIA in 2008, the percentage of children with elevated blood lead levels has stopped declining. In 2009, the percentage was 0.61%. In 2012, it was 0.62%.
As the statistics show, a public health campaign since the 1990s to reduce lead levels in children has obviously been working. That effort predates CPSIA. There is no evidence that CPSIA reduced, or is reducing, elevated lead levels in children in any way. But the evidence is clear about one thing – CPSIA sure succeeded in reducing jobs, businesses, and consumer welfare in Conway.