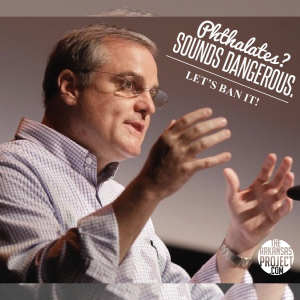 Senators aren’t rocket scientists. In fact, most of them aren’t scientists at all. There are a few doctors in the Senate. The House of Representatives has a microbiologist, but most of the members of Congress are about as educated on science as you or I. That, however, doesn’t stop them from pretending to be scientists.
Take the ban on certain phthalates in the Consumer Product Safety Improvement Act (CPSIA), the federal legislation I’ve written about in previous posts. What’s a phthalate? How do you even pronounce it? Those are good questions. If you see Senator Mark Pryor, you may want to ask him. I hope he knows a lot about these substances, since CPSIA was his baby.
The Consumer Product Safety Commission (CPSC) describes phthalates as “chemical plasticizers that are often used in the production of many types of plastics. Phthalates most often, but not always, are used to make plastics softer and/or more pliable.” If you do a Google search, you’ll see a lot of scare stories about these chemicals. They get blamed for everything from cancer to infertility, although the stories rely more heavily on conjecture than evidence.
While the popular press and Congress may have rendered a judgment on phthalates, the scientific community has a much more mixed verdict. M. A. Kamrin reviewed the research on phthalates in a 2009 paper and concluded:

Analysis of all of the available data leads to the conclusion that the risks are low, even lower than originally thought, and that there is no convincing evidence of adverse effects on humans. Since the scientific evidence strongly suggests that risks to humans are low, phthalate regulations that have been enacted are unlikely to lead to any marked improvement in public health.

In fact, Congress enacted the ban in direct contradiction to the advice offered by the CPSC (h/t to Walter Olson at Overlawyered for the link):
The commission opposed the ban because “there was not a risk of injury to children,” says Dr. Marilyn Wind, deputy associate executive director for health sciences at CPSC.
It reached that conclusion after studying phthalates in toys for more than 25 years and acting several times to make sure children were not exposed to even a slight risk from products that contain the chemicals.
As the father of two children, I don’t want them exposed to dangerous chemicals. But I know that much of the media hype about dangerous chemicals is bunk. Companies use phthalates in their products for a reason. I like having children’s products that are soft and pliable. If we’re going to remove phthalates, or replace them with something else, then let’s make sure that phthalates are really dangerous before we do it.
As Harriet Hall on the blog Science-Based Medicine says:

Trying to eliminate one risk often results in other, unforeseen ones. Banning BPA and phthalates would result in substituting other compounds that are more costly, may not work as well, and have not been as well tested for safety. BPA-free products are marketed for what they are not, not for what they are.

Senator Pryor also seems to recognize the possibility that the trade off of a phthalate ban may not be worth it. During a 2008 Senate Commerce Committee hearing on phthalates, he said “We need to be careful in how we proceed, I think, because if we are not careful, if we ban one thing, some other phthalate may come on the market that may be more hazardous, more dangerous.”
And yet, the CPSIA banned three phthalates (and placed a temporary ban on a class of other phthalates) based on a lot of hype and very little solid evidence.
Just like most senators, I’m no scientist. (Indeed, I am just as aware as Senator Pryor that you don’t have to pass an I.Q. test to be in the Senate.) However, I know that it’s a bad idea to ban useful chemicals based on a hunch or some scare stories about what might happen if people ingest them. We have a regulatory process that works fairly well to take dangerous chemicals out of the marketplace. The CPSIA’s phthalate ban simply enshrines fear mongering into the law.