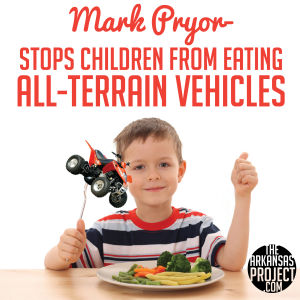 Can all-terrain vehicles (ATVs) be dangerous to children? Of course.
When I was 12, my cousin and I were riding on my grandfather’s 4-wheel ATV. Our behavior was about as mature as that of a typical 12-year-old, which is to say that we were driving the ATV backwards at a high rate of speed. My cousin turned the ATV sharply, causing it to flip over and roll on top of us. Let’s just say that I have some idea of how unsafe an ATV can be.
Our foolish actions on the ATV that day (and many other days) put us in danger. You know what didn’t put us in danger? Lead that was used to make the ATV’s parts. But the Consumer Product Safety Improvement Act (CPSIA), shepherded through the Senate by Sen. Mark Pryor, required that children’s ATVs meet stringent lead standards.
Why? Not because there was an epidemic of lead poisoning from kids eating ATV parts. Instead, the bill’s broad language covering all children’s products included a variety of pointless edicts. The regulations imposed on ATVs are just one example of how Sen. Pryor’s poorly-written legislation caused huge problems for American businesses.
After Congress passed the CPSIA, a group of ATV manufacturers petitioned the Consumer Product Safety Commission (CPSC) to exclude some ATV components from the law’s testing requirements. Among these components were battery terminals (which could be entirely made of lead), as well as:

Tire valve stems, fittings and connectors made with copper (and brass) alloys; brake and clutch levers and other brake components, throttle controls, engine housings, and carburetors made with aluminum alloys, and fasteners, frames, and structural or engine components made with steel alloys…

Those are essential parts for any ATV. There is no way these manufacturers could have met CPSIA’s lead requirements and still functioned.
Was this necessary to protect children? Probably not. Children have to ingest lead for it to be a danger to them. In a 2009 letter to Rep. John Dingell from Acting CPSC Chairman Nancy Nord, CPSC staff explained why mandating lead tests for ATVs is overkill:

The possibility that children will suffer significant lead exposures from these classes of vehicles appears to be remote at best. First, the vehicles are generally stored outside the home, where younger children would rarely be allowed unsupervised access. The vehicles are generally designed for children of at least 6 years of age and older. These children are far less likely to ingest or mouth components of a motorized vehicle – even those that are physically exposed – than something that fits readily in the mouth, such as a jewelry chain or charm.

As discussed in my previous post, the rate in children’s elevated lead levels had been falling for over a decade prior to the enactment of CPSIA. There is no evidence that, prior to CPSIA’s passage, children eating lead from toys – or ATVs – was a significant cause of lead in their bloodstream.
Banning youth ATVs because of concerns about lead parts not only won’t protect kids, it could endanger them, as CPSC staff notes:

The CPSIA required that all youth All-Terrain Vehicles (ATV) sales be discontinued due to lead content of some component parts. However, youth ATVs were introduced to encourage parents to purchase and children to ride appropriately sized ATVs. The CPSC staff has previously stated that the risk of injury increases when a child rides an adult ATV as opposed to a non-adult ATV. The elimination of youth ATV sales will most likely increase the number of adult ATVs purchased to be used by younger children; therefore increasing their risk of injury and death.

This policy disaster was too much for Congress to bear. In 2011, it passed a law that exempted youth ATVs from the lead testing requirements. That’s good news, but the two years of turmoil caused by Senator Pryor’s legislation would never have happened had the original legislation been more carefully written.