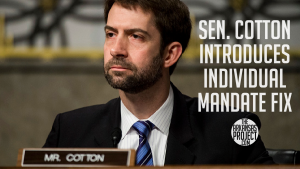 Tom Cotton earlier this week introduced legislation that would repeal the individual mandate under Obamacare for many Americans.

Under Obamacare, households which don’t comply with the law’s individual mandate to purchase health insurance are required to pay a so-called individual shared responsibility payment.

The Mandate Relief Act of 2017 introduced by Cotton and Sen.

Pat Toomey would repeal the mandate for individuals if:

Cotton said in a statement on the legislation:

Imposing the individual mandate opened a Pandora’s box of unintended consequences. Instead of stabilizing the insurance markets, it forced hardworking families to get by with even less. This bill will give them the relief they deserve by exempting working-class Americans from this cruel, unjust tax.

The effects of this mandate have hit the poor and middle class in Arkansas particularly hard. The latest data from the Internal Revenue Service (IRS) found that 81 percent of households in Arkansas penalized under the mandate were making less than $50,000 annually.

Arkansas households making less than $25,000 were responsible for nearly 42 percent of those penalized.

It’s good to see Cotton and Toomey giving another shot at giving those punished under this law some relief.