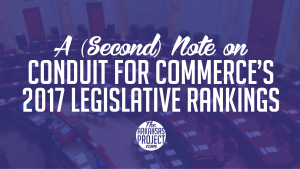 I actually think that Conduit does a lot of good work, and I guess I was unaware that they think it is bad manners to disagree with them publicly. I must admit I was surprised by their response: the Conduit operatives unleashed a barrage of personal attacks on me and my wife which were false and groundless.

When Brenda Vassaur Taylor was on Paul Harrell’s radio show last week, he asked her to respond to our article. I was naïve enough to think that she might try to defend her work against the methodological criticisms we made of it.  Instead, she replied “Dan is paid by the people who want the tort reform bill passed, and his wife does work for the nursing home association PACs, and that is what it is. And so he has an interest in writing an article like that.”
Now, I am sure that Brenda knows perfectly well that none of that is true. I am paid – indirectly, I guess – by hundreds of AAI donors, some of whom support tort reform and some of whom don’t. (I admit that, in the past, I have helped draft some proposed tort reform amendments, and I was honored to do so.) My wife doesn’t work for any political action committees at all. My position on tort reform hasn’t changed; every two years, we publish our Action Plan for Arkansas; in 2013, 2015, and 2017 we published almost identical tort reform recommendations in that book. In fact, before its recent move to the left on tort reform, Conduit cosponsored the 2015 edition of our book that contained our tort reform recommendations.

Of course, Brenda’s attempt to deal with substantive issues by attacking the personalities and economic circumstances of people she disagrees with isn’t just irrelevant (although it certainly is). And it isn’t just horribly rude (although, again, it certainly is). Surely Brenda realizes that, if she wants to argue that it’s less important what the facts are than who the funders are, this undercuts her entire appearance on Paul Harrell’s show. I mean, maybe Paul puts commercials for Conduit on his show only because he admires them so much.

Maybe there’s a big watermark on all of Paul’s videos that says “Conduit Media” just because he’s impressed by the logo’s aesthetic qualities. But there are other explanations: I guess Brenda could argue (to paraphrase her quote above) that Paul is paid by the people who want tort reform to fail, and so he has an interest in producing a show like that.

Now, I think reasonable people do not take these kinds of arguments very seriously. The quality of the arguments for and against tort reform do not depend on how many dollars their advocates spend. Maybe Brenda just had an off day and didn’t realize this; nonetheless, it’s kind of startling that she produced an argument that so comprehensively discredits Conduit Media while she was appearing on its show. My own opinion, in contrast, is that we ought to make decisions based on logical arguments, and that the logic of an argument does not depend on its source. (If we’re going to say, for instance, that we shouldn’t listen to a teacher’s or administrator’s opinion about education policy because of where he or she gets her paycheck from, we’re going to lose a lot of valuable perspectives.)
The Paul Harrell show has recently discussed the Conduit scorecard on four different shows (in what Paul, on air, called a “developing” story), and it has devoted considerable time in several of them to broadcasting false statements about me and my wife. For obvious reasons, I was rather taken aback at this and sent Paul a text asking him if I could appear on his show. It was at that point that the story apparently stopped “developing”; Paul informed me that he was “moving on.” That’s his decision, I guess (or perhaps it is more accurate to say that it’s the decision of whoever runs “Conduit Media”).

That’s OK – I have other platforms. Tomorrow at 2 p.m., I’ll be appearing on Dave Elswick’s show on 96.5 FM (along with State Rep. David Meeks) to discuss how legislative scorecards are supposed to work. After all, why should “Conduit Media” have all the fun? Later this week, we’ll publish a new follow-up post about the newest defenses of the Conduit ratings; and I promise I am going to do my best to stick to relevant arguments. Mostly.