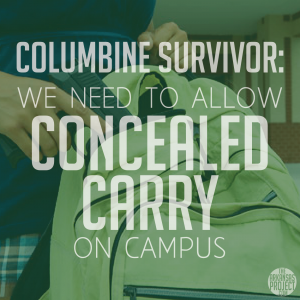 Contrary to the claims of concealed-carry opponents, allowing concealed carry on campus among faculty and staff actually does make us safer, says a survivor of the Columbine High School massacre.
From the Denver Post:

A student who survived the Columbine High School massacre has introduced a bill that would allow anyone with a concealed weapons permit the right to conceal and carry firearms in public schools.
Rep. Patrick Neville, R-Castle Rock, was a student at Columbine in 1999 in Jefferson County when two seniors went on a rampage, killing 12 fellow students and a teacher.
“This bill will allow honest law-abiding citizens to carry a concealed firearm for protection if they choose to,” Neville said in a news release. “But most importantly, it will give them the right to be equipped to defend our children from the most dangerous situations.”
An April 2014 poll from Quinnipiac University found 50 percent of Colorado voters supported allowing teachers and school officials to carry guns on school grounds. Men supported the measure 59 percent to 38 percent while women were opposed 51 to 42 percent.
…
Patrick Neville believes his bill will lead to less school shootings. The current law “barring law abiding permit holders from carrying in schools is an open invitation for violent thugs and criminals intent on doing harm,” he said.
“Parents wake up everyday and bring their children to school on blind faith that their kids will return home safe. Unfortunately the current system continues to leave our children as sitting targets for criminals intent on doing harm.”

Neville’s story is just another reason the Arkansas legislature should give Charlie Collins’s “Campus Carry” bill another look. “Glance and nod” policies aren’t a serious solution to protecting Arkansas students.