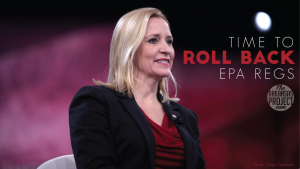 She’s making a list and checking it twice.
Attorney General Leslie Rutledge recommended the “repeal, replacement, or modification” of six Obama-era environmental regulations in a letter to the Environmental Protection Agency (EPA) last week with seven other state attorneys general.

Rutledge said in a statement about the letter:

The EPA has a unique and important opportunity right now to evaluate its regulatory programs and identify what is working and not working. More importantly, it is a chance for the EPA to return its focus to the rule of law as it develops rules and regulations. With Administrator Pruitt, attorneys general have a welcoming and working partner at the table, and I have a duty on behalf of Arkansans to provide a list of regulations that should be rolled back.

The regulations mentioned in the letter include the so-called Clean Power Plan and the Waters of the United States rule. We’ve written previously about these regulations here and here.

A study by the American Coalition for Clean Coal Electricity (ACCCE) found that Arkansans will face an average annual electricity price increase of 20 percent if the EPA’s so-called Clean Power Plan isn’t repealed.

Rutledge said in a statement:

During the Obama administration, we experienced first-hand the devastating effects of unlawful executive overreach on jobs and our states’ local energy economies. We welcome the opportunity to participate in the process of scaling back these unlawful regulations, restoring the rule of law and ultimately returning key decisions about energy production and priorities to the states and their citizens.

The EPA already seems to be reversing course under the new Presidential administration. President Trump’s fiscal year 2018 budget cuts the EPA’s funding by 32 percent, while examining “its programs to identify those that create unnecessary redundancies or those that have served their purpose and accomplished their mission.”
EPA Administrator Scott Pruitt said today:

The President’s budget respects the American taxpayer. This budget supports EPA’s highest priorities with federal funding for priority work in infrastructure, air and water quality, and ensuring the safety of chemicals in the marketplace.

A spokesman for Rutledge didn’t return a request for comment today on the proposed EPA budget, but we’ll update when he does.