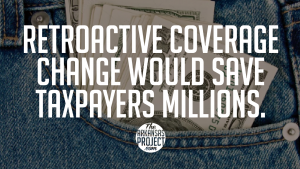 The Arkansas Department of Human Services (DHS) is planning on implementing a new change to Arkansas Works next month that would save taxpayers millions of dollars.

The rule change by DHS stems from the 2016 special-session law creating (or renaming) the “Arkansas Works” Medicaid expansion program.

The law authorizes DHS to submit a waiver to the federal government “to eliminate retroactive eligibility for an eligible individual” enrolled in Arkansas Works.

Currently, ”Arkansas Works” gives enrollees 90 days of retroactive coverage. In practice, this means eligible enrollees are able to sign up for health insurance months after going to a medical provider — and then have state and federal taxpayers pick up the tab for previous health care expenses.

If someone applies and is approved for the Arkansas Works program…any bills they may have had 90 days previous to that application would be covered by the insurance company. That doesn’t work in the real insurance world.

We were behind for so many years with determining eligibility. Now we’re completely current and can determine eligibility quickly and accurately. We no longer need this 90 days of retroactive eligibility.

(Linck was then corrected by DHS’s Director of County Operations Mary Franklin, who noted that the retroactive payments would be paid through DHS Medicaid payments, but the larger point still stands: under the new rules, the government would not pay for such extensive retroactive obligations.)
Basically, this change would transform the quasi-insurance plans sold through “Arkansas Works” into something that’s a little more like how insurance traditionally works. For example, if you get in a wreck when you don’t have car insurance, you can’t apply three months later for health insurance and expect the insurance company to cover the cost of the repairs.

According to DHS, the proposed rule change would save state taxpayers $266,549 for the current fiscal year and $371,265 in the next fiscal year. Federal savings would amount to nearly $10 million over these two fiscal years.

The rule change has received verbal approval from the federal government; it was scheduled to go into effect on September 1. However, the committee voted not to take action on the rule change, so it’s possible that this rule change may be delayed.

According to Linck’s testimony, the rule could affect the coverage of prison inmates, so the Department of Corrections is concerned about the retroactive coverage change.

Missy Irvin said during the committee meeting that she had a “problem” with the rule, due to the cost savings coming “from not paying the providers for doing the services they actually did.”
But — as astonishing as this may seem — insurance companies typically aren’t responsible for paying the bills for services extended to people who weren’t enrolled when the service was rendered.

It’s important to note that this change wouldn’t even completely eliminate retroactive coverage. Eligible enrollees could still have health care expenses covered through “Arkansas Works” if they were done the same month the application was submitted.

The new status quo would still be much more generous than the traditional insurance format. Once again, try getting in a wreck on August 15 and then submitting an application for car insurance on August 20 in an attempt to get repairs covered by an insurance company.

This rule change would at least be a step in the right direction of making “Arkansas Works” more like traditional insurance.

One thought on “Retroactive Coverage Change Would Save Taxpayers Millions”