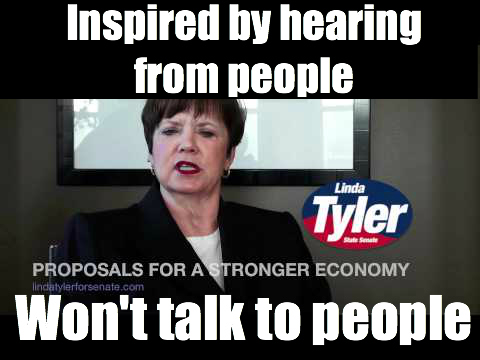 On October 4th, I called state Representative Linda Tyler for an interview. I reached her voicemail and requested a call back — to her credit, she did call me back the next day and asked me who I was, who I worked for, etc. When I told her “The Arkansas Project,” she told me she would have to get back to me because she was driving. I told her I would be at my desk the rest of the day (this was about mid-morning on a Friday) or she could call me anytime Monday. Needless to say, it’s been 25 days and I haven’t gotten a call back. I tried to reach her by email as well — I have even tweeted her!

I wanted to ask Tyler about her support for the quick action closing fund (QACF), which earned an entire page on her campaign website. In fact, Tyler’s page actually lists LM Wind Power — the wind energy company that has been propped up by taxpayers and is now bleeding jobs — in a paragraph touting the success of government-subsidized business:

“Linda Tyler has been, and will continue to be, a strong supporter of the Quick Action Closing Fund. This fund has helped more than 26 companies and brought $766.6 million in new business investment to the state. These investments have created nearly 6,407 jobs with a projected average wage of $20.33 an hour. Every dollar invested by the state has produced a return of $2.90. Specifically the fund invested nearly $10 million in incentives for Hewlett Packard in Conway. Other large employers that have benefited from this initiative are LM Glasfiber, Daasault/Falcon, Windstream and Welspun…”

If you need a refresher on how “prudently” LM Wind Power (referred to as “LM Glasfiber” by Tyler) spent their taxpayer handouts, see my previous reporting here:

Ironically, Tyler has another section of her site entitled, “Effective & Efficient Government.”

Unfortunately, the people of Arkansas will likely never fully know where Rep. Tyler stands on this issue. But here are the questions I wanted to ask her:

If Rep. Tyler would like to answer these questions, I would be more than happy to post her responses as an addendum to this post before the election.

Tyler scored a 57% overall on Advance Arkansas Institute’s Freedom Scorecard, which rates legislators based on their votes regarding economic freedom, education reform, good government, personal liberty, small government, and tax/budget policy. You can visit AAI’s website to see how your legislators scored.

This type of redistribution — where government takes money from individuals and gives it to their favorite businesses — isn’t just bad economics. It’s immoral. And if the moral argument doesn’t compel you, consider this: we’ve been trying to tax, spend, and subsidize our way to prosperity in Arkansas for generations. Where has it gotten us? Our economy is still third-tier at best, while our neighbors like Texas and Tennessee are thriving (without a state income tax, I might add). Perhaps the best way to unleash economic growth in Arkansas is to get the government out of the way?

According to the About section of her website, “becoming state representative has allowed [Tyler] the privilege of hearing the stories of those she serves every day. And it’s those stories, and the people that tell them, that drive her to want to serve in the Arkansas State Senate.” So why won’t she talk to me?

4 thoughts on “Representative Tyler, I’ve Been Trying to Reach You”