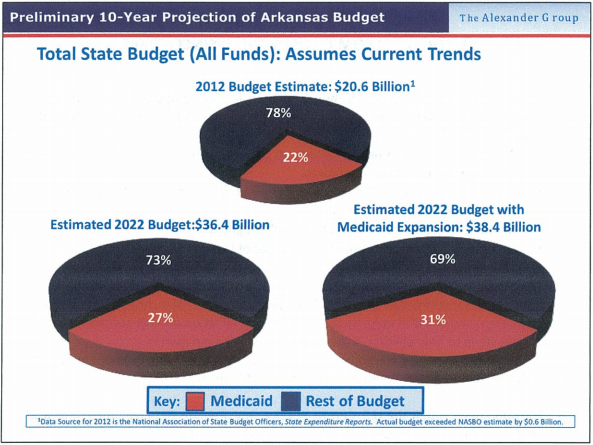 Later this month, the legislature’s two Public Health, Labor and Welfare Committees will hold a joint meeting. At that November 18 meeting, lawmakers will review the findings of this study that was commissioned by the legislature (compliments of taxpayers) to review our Medicaid and public welfare system. However, the report has already been published on the legislature’s website and the findings are, in a word, startling.

You can read the full report here, but here are some absolutely staggering facts that are outlined:

I’ll repeat that, in case you didn’t catch it: there will be more people on Medicaid in Arkansas than people working in the private sector in Arkansas.

And in case that’s still too much to comprehend (I’m struggling with it myself), here’s a graph that shows the estimated growth:

Additionally, the authors of the study say this growth is unsustainable:

…It is very reasonable to expect that the rest of the budget will not be able to grow at the same pace, thus giving Medicaid a far larger share of the total budget than the predicted 26.9 percent. That means continued reduction or forced cuts in other state programs and services. Based on these forecasts, it is reasonable to conclude that Medicaid will continue crowding out other state priorities.”

Finally, the study cites numbers from the Office of the Actuary for the U.S. Department of Health and Human Services that shows Arkansas’s Medicaid expenditures will more than double over the next ten years — and this estimate doesn’t factor in the cost of expansion.

The legislature will meet on November 18th at 9:00 a.m. in the MAC building to discuss the findings of this study. The author, Gary Alexander, will be present to answer questions. His remarks will be followed by pleas excuses testimony from state department heads. You might want to be there.

One thought on “REPORT: Medicaid Enrollment To Surpass Private Employment In Arkansas”