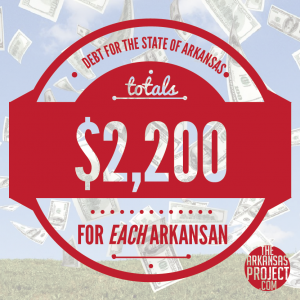 If your wallet feels a little lighter lately, that’s because the state of Arkansas has you on the hook for approximately $2,200.
According to the 2013 Financial State of the States Report released recently by Truth In Accounting, Arkansas state government owes approximately $9.2 billion, which is more than its $7.5 billion in assets.
Arkansas is one of many “sinkhole states” which owe more money than they currently have in assets, according to the report.
From the report:

The state of Arkansas is sinking in debt.  The State’s $1.7 billion shortfall represents compensation and other costs that have been pushed into the future.
Arkansas statutes require the legislature to pass a balanced budget.  One of the reasons Arkansas is in this precarious financial position is state officials use antiquated budgeting and accounting rules to report Arkansas’s financial condition.  Since employee retirement benefits are not immediately payable in cash, the related compensation costs have been ignored when calculating balanced budgets.
The state of Arkansas has $25.2 billion in assets, but most of these assets are not available to pay State bills.
The $14 billion of capital assets, such as roads, buildings, and land should not be sold to pay bills. The use of $3.6 billion of the assets is restricted by law or contract.
That leaves $7.5 billion of State’s assets available to pay $9.2 billion of bills as they come due.
The $1.7 billion shortfall represents compensation and other costs incurred in prior years that should have been paid in those prior years.  Instead these costs have been shifted to future taxpayers.

Each Arkansas taxpayers’ burden for this $1.7 billion shortfall is $2,200. The report also found that approximately 78 percent of employee retirement benefits that the state owes are not clearly disclosed.
The report said:

Truth in Accounting’s detailed analysis discovered a total of $4 billion of retirement benefits have been promised but not funded.  Because of the confusing way the State does its accounting, only $858.3 million of these liabilities are reported on Arkansas’s balance sheet.
Unfunded employees’ retirement benefits represent 43% of State bills.  These unfunded liabilities have accumulated because State employees have been promised $1.8 billion of pension benefits and $2.2 billion of retirees’ health care benefits, but the State has not adequately funded them.
Unless these pension and retirees’ health care benefits are renegotiated, future taxpayers will be burdened with paying for these benefits without receiving any corresponding government services or benefits.

Arkansas politicians like to boast about how they balance the budget every year — but as this report shows, not even a Balanced Budget Amendment has been able to keep the state from running a deficit. Arkansas legislators can ignore unfunded liabilities like a college kid ignores his credit card debt, but some day the bill will arrive and have to be paid.