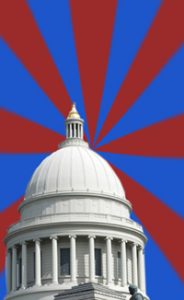 One of the consistent problems with big, new government entitlements is that politicians and bureaucrats usually understate or underestimate the program’s actual cost.
A new report out today shows that the “private option” in Arkansas and other Medicaid expansion programs across the nation suffered from that exact problem in 2014. Arkansas’s “private option” Medicaid expansion turned out to be 36 percent over the enrollment projections originally expected for 2014. Enrollment for 2014 was projected at 172,000, but 233,518 Arkansans actually enrolled.
In short, you might say that projections didn’t exactly match up with reality in Arkansas’ “private option” in 2014.
From the Foundation For Government Accountability (FGA):

A new report out this week from The Foundation for Government Accountability details just how inaccurate original Medicaid enrollment projections were and how expensive expansion may become.
Each state estimated the number of its citizens who would sign up for Medicaid expansion before they began enrollment. They sold the program as cheaper than you would expect because of the low projected enrollment numbers. It turns out many states were wrong. In fact, 16 of the 17 states that had data available are over original projections.

Now, Gov. Asa Hutchinson has said he’s going to end the “private option” Medicaid expansion at the end of 2016 — and that just changing it in “minor ways” and relabeling it is “off the table.”
That’s good, but one thing conservatives know is that it’s much easier to start a new government program than it is to end one, especially because individuals and certain industries come to depend on it.
You could see example after example of this at the “private option” legislative task force meeting yesterday at the Capitol. Most of the testimony came from hospital industry officials currently profiting from the “private option.” They’ll likely oppose any significant changes to the program that the legislature  might attempt this year or the next. Shockingly, speakers from the hospital industry never brought up enrollment being over projections in 2014.
Hopefully, inconvenient truths such as this new FGA report detailing enrollment overruns and other allegedly unanticipated future costs will get discussed at future “private option” task force meetings, as state Rep. Terry Rice has requested.

One thought on “Report: Arkansas 36% Over 2014 PO Enrollment Projections”