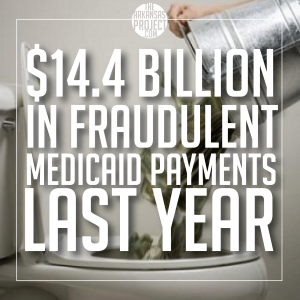 A new report from the Government Accountability Office reveals that federal taxpayers financed $14.4 billion in “improper payments” last year — and who knows how much state taxpayers pitched in:

In fiscal year 2013, the Medicaid program covered about 71.7 million individuals at a cost of $431.1 billion, of which CMS estimated that $14.4 billion (5.8 percent) were improper payments.

GAO says the program is so big and “diverse,” it’s tough to monitor fraud. Some of this fraud includes violation of Medicaid rules and billing for services that were never provided:

The size and diversity of the Medicaid program make it particularly vulnerable to improper payments—including payments made for treatments or services that were not covered by program rules, that were not medically necessary, or that were billed for but never provided.

Finally, GAO said (unsurprisingly) the problem could get worse under Obamacare in coming years:

And the problems are getting worse: the state of Arkansas recently revealed that 5,000 Arkansans were improperly enrolled in the state’s Medicaid expansion program. Numerous other states are also experiencing fraud problems under Obamacare.
Meanwhile, the national debt clock continues to tick. It’s now at over $17.5 trillion.