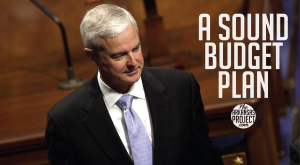 Republicans want to shred the social safety net and throw old folks and people with disabilities onto the street – that’s a common talking point from those on the left side of the spectrum. Regardless of whether it is true or not, this charge plays well, so it should be no surprise that we see it resurface this election year.

Steve Womack along these lines in a recent letter to the Post and Courier. As chairman of the House Budget Committee, Rep. Womack has a lot of power to shape federal spending. Along with this power comes a target on this back – he gets a lot of blame from people who don’t like the spending plans coming out of Congress. And Mr. Cox is not happy about the recently-passed House budget resolution and the tax cuts that congressional Republicans enacted late last year.

Mr. Cox is not shy about attacking Rep. Womack. Much of his vitriol is baseless, as I explain below, but I partially agree with Mr. Cox that the tax cut pushed through by congressional Republicans will exacerbate the deficit. The way to deal with this reality would have been to cut spending to offset the tax cut’s deficit effects, but that didn’t happen at the time.

This budget plan, however, does attempt to control spending. Strangely for someone who supposedly has such a concern about deficits, this attempt to control spending is also attacked by Mr. Cox. He is especially inflamed that the budget will “cut” entitlement programs like Medicare, Social Security, and Medicaid. What he fails to say is that this resolution does not really cut these programs if we understand a “cut” to mean a reduction in today’s level of spending. Instead, the budget resolution would allow reductions in the growth of these programs.

Mr. Cox contends that the tax cut bill was a pretext to create a budget crisis that is now being realized with the “long-term Republican goal of dismantling the social safety net.” What nonsense. It has long been recognized that entitlement, or mandatory, programs posed a huge threat to the federal government’s long-term fiscal health. This would have been the case whether the recent tax cuts happened or not.

The House Budget Committee lays out the math:

What happens when these programs go insolvent? It does not mean that the programs will end. Instead, beneficiaries will see automatic cuts, as Eric Boehm of Reason magazine explains:

By 2026 and 2034, respectively, Medicare and Social Security will not have enough money to pay the full cost of their obligations, but that’s not the same as saying they’ll have no money at all. According to the trustee report, Social Security beneficiaries will face a 21 percent across-the-board benefit cut when insolvency hits. Medicare’s insolvency will hit first in the program’s hospital fund; without changes that will only be able to pay for 91 percent of costs. And then that number will steadily decline, barring serious reform.

So why not increase the amount of income subject to the Social Security payroll tax instead of slowing the rate of these programs’ growth? That is what Mr. Cox suggests. For one, this would only deal with Social Security’s problems, not Medicare’s insolvency issues. Expanding the income limit on the Social Security tax would also mean a huge marginal tax increase, as the Cato Institute’s Charles Hughes explains:

Substantially increasing the tax cap, or removing it completely, is far from the modest tweak that would be-reformers portray it as, and would be a significant and burdensome tax increase that would lead to a number of negative economic responses. And it’s not just “the rich” who will face these higher taxes: roughly 20 percent of current and future covered workers are projected to earn more than the taxable maximum at some point in their lives, and almost 40 percent of beneficiaries in 2050 ever earning above the taxable maximum aren’t in the highest quintile of lifetime earnings, according to projections from the Social Security Administration.

I don’t like everything in the House budget resolution, but it is absurd to attack its plan to slow the growth of entitlement programs. Anyone who looks at the budget numbers can clearly see that these programs are growing at a rate that will cause huge fiscal problems in the coming decades. Something has to be done to address their growth. Lifting the Social Security tax cap is not a realistic answer. Rep. Womack deserves credit for helping to craft a budget resolution that attempts to provide this answer.