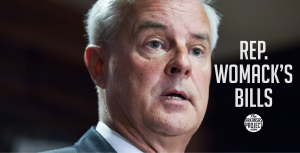 As part of an ongoing TAP series, we are looking at the legislation introduced by members of the Arkansas congressional delegation. Today, the legislation sponsored by Rep.

Here are the 6 bills he has sponsored during this congressional session:

The last bill, House Concurrent Resolution 128, is a product of Rep. Womack’s chairmanship of the House Budget Committee. This is a powerful position that has a major influence over the direction of federal spending. It is tasked with producing a budget every year that Congress will follow when appropriate spending. Of course, in recent years Congress has a poor track record of actually passing that budget resolution.

Tomorrow we’ll finish up this series by looking into Rep.