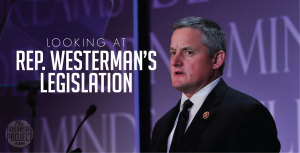 Here on TAP, we’ve been using our recent blog posts to focus on the legislation introduced by members of the Arkansas congressional delegation. Today we are ending this series by examining Rep.

Here are some of the 9 bills he has sponsored:

The bills that Rep. Westerman has introduced indicate his strong focus on land use and environmental issues. Since he is a forester, this makes sense. These bills would make reforms to the current federal practices in ways that make a lot of sense to me. HR 6355, for instance, is meant to prevent organizations or individuals from filing frivolous endangered species act petitions that lead to lawsuits. I’ve written about the positive aspects of HR 5170 and HR 2936 (in another legislative form) on TAP previously. Sensible federal land management is often prevented by absurd environmental regulations, and Rep. Westerman’s legislation addresses some of the more egregious examples of this.

I hope this series has given TAP readers some insight into what the six men who represent Arkansas in Congress are doing. While members of Congress vote on a variety of measures encompassing a wide range of subjects, their real interests can be seen by the bills they introduce. We’ll continue to highlight their bills so you’ll be better informed as to how you’re being represented in Washington, D.C.