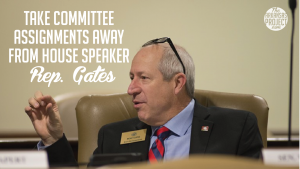 The process for committee assignments in the state House may be debated again.

This process was changed for the previous legislative session after Democrats attained a majority on the House Revenue and Tax Committee, despite voters electing a three-fourths Republican majority in the House.

Democrats were able to accomplish this under the previous system, which favors seniority. Some Republicans like Lt. Gov.

Tim Griffin saw this system as thwarting the will of the voters in the 2016 elections.

In response to the Democrats’ maneuver, in January the House approved a rule change that gives the Speaker of the House authority over selecting committee assignments.

It looks like the Republican Party wants the rules to be changed on this process again.

During the party’s summer state committee meeting on Saturday, members approved a resolution by the Benton County Republican Committee asking for a change in how legislative committee membership is chosen in the House. By a large majority, state Republican committee members voted to ask the House to return to using seniority in committee selections, but guarantee the dominant political party a commensurate number of seats on each committee.

Mickey Gates told The Arkansas Project today that he plans to introduce such a resolution for a vote when the House meets next. The next regular session isn’t scheduled until 2019, but it could be voted on sooner (for instance, during the 2018 fiscal session).

My reaction has been from the beginning: we presented an idea to the body and the members voted for it — so, this biennium, that conversation has already taken place. Future General Assemblies will decide their own rules and can do an analysis of whether this particular system has worked and they can proceed forward accordingly.

There is no other state in the Union that does it the way Arkansas used to do it: namely, a strict adherence to the seniority system.

It looks like the House committee assignment process will be a subject of debate for months to come. The rules change in the House in January was arguably an overreaction to Democrats gaining one majority on one committee. Why change to a system that gives complete committee selection power to the Speaker of the House?
Democrats’ majority on one House committee didn’t block any legislation of note. Any legislation in the Revenue and Tax committee could’ve been pulled out to the full House if 67 legislators wanted to go that route.

It’s not clear to me why concentrating Democrats in one committee had bad consequences. Republicans got huge majorities on other major committees, where conservative legislation like “enhanced carry” and a freeze on Medicaid expansion easily made it out of House committees.

It doesn’t look like the old seniority system is on the table any longer, though. Gates’s proposal might be a viable compromise that would ensure the Speaker of the House doesn’t accrue too much power over the committee process.

One thought on “Rep. Gates: Take Committee Assignments Away From House Speaker”