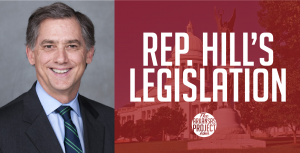 Many of the bills sponsored by Rep. Hill pertain to banking, which makes sense given his background in banking and his membership on the Financial Services Committee. These bills often seek to give smaller banks greater flexibility under federal rules. He deserves credit for this, considering that these rules are in place to prevent a “too big to fail” scenario like we saw during the financial crisis of 2008. Smaller banks do not pose a risk to bring down the financial system. They should be allowed greater leeway to run their business as they and their depositors see fit.

One bill, HR 5078, passed the House by a voice vote. That indicates that this legislation was viewed as a non-controversial proposal that had wide backing by members of both parties. Another bill, HR 4790, passed the House in amended form.

Tomorrow we’ll have an overview of what Rep.

Steve Womack has been doing in Congress.