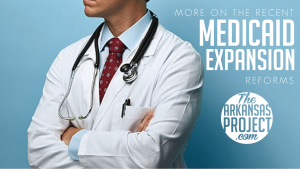 Is it cruel to ask Medicaid expansion enrollees to pay monthly premiums in exchange for taxpayer-subsidized health insurance?
Opponents of recent reforms to “Arkansas Works” passed by the legislature seem to think so. One of these changes is the closing of access to “Arkansas Works” Medicaid expansion to those between 100 percent and 138 percent of the federal poverty level.

This population of Medicaid expansion clients currently amounts to about 60,000. Under previous law, these enrollees were “required” to pay a premium of $13 per month. The problem with this “requirement” was that there was essentially no downside if enrollees failed to pay.

According to committee testimony Monday, approximately 78 percent of the population who owed this premium weren’t paying it. That’s likely because there was no risk of losing coverage if no payment was made.

Under the legislation passed yesterday, enrollees making 100 percent to 138 percent of the federal poverty level would no longer be covered under Medicaid expansion — instead, they would be able to sign up on the federal healthcare exchange to get health care coverage.

The difference would be that these enrollees would be required to have a little more skin in the game to keep receiving this coverage. They would now be required to pay premiums of two percent of their household income in 2018 to maintain coverage on the federal exchange.

David Ramsey of the Arkansas Times wrote yesterday that this would mean these enrollees would have to pay more in premiums on the federal exchange than they would today under Arkansas Works.

This is literally correct, but he also quotes a state Department of Human Services spokesman who says these enrollees were already scheduled to be required to pay a monthly premium amounting to two percent of their household income in 2018 even without these reforms to “Arkansas Works.”
It’s also fair to point out that any required premium payment would’ve been more than what enrollees previously paid, since 78 percent of enrollees in this population on Medicaid expansion already weren’t paying any premiums.

The main difference under this change is that enrollees would risk losing their health insurance if they don’t consistently make their premium payments.

Kelley Linck, a former legislator who supported Medicaid expansion and who now works for DHS, stated this in committee Monday:

It’s not just that if you miss a month, you’re out until renewal comes up. If you get behind for three months of payments then it’s going to drop until open enrollment.

Linck added that, currently, there’s no incentive for these enrollees to pay their premiums since they aren’t at risk of losing their coverage, but that would change if these reforms became law.

The idea that some enrollees should have to consistently bear some of the cost in order to receive taxpayer-subsidized benefits seemed to trouble some Democratic lawmakers this week.

There’s some real concern from me about bringing these people on board with paying premiums. We all want people to be personally responsible, but most of these people are working minimum wage jobs. They don’t necessarily have bank accounts. They live very differently than most of us who pay insurance premiums. I just think it’s going to take a lot of education and a lot of outreach.

I think your opinion on these changes comes down to whether you think it’s fair to require this population of about 60,000 to pay some of the cost in exchange for the services they receive. Most Arkansans are already subject to this kind of system when they make monthly payments on their private plans or federal Obamacare plans — or on their rent, their car, or their mortgage.

Ultimately, I think this reform is a step in the right direction: namely, transitioning more enrollees away from a system that — in practice — gives its beneficiaries a free ride.