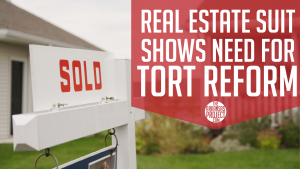 Is a real estate company responsible for the murder of agent Beverly Carter? That’s the question raised in a suit filed by Carter’s family. This raises a larger question, however: should Arkansas law encourage lawsuits based on such creative legal theories? To my mind, what this lawsuit demonstrates is that Arkansas desperately needs tort reform.

The family of the victim alleges that Crye-Leike Real Estate did not provide proper training to Carter; according to the lawsuit, she was therefore ill-equipped to avoid dangerous situations. It’s clear that no one with the company planned or carried out Carter’s murder. Two people have been found guilty of this heinous crime; they are now serving prison sentences. This is a horrific case, and the two murderers deserve the harshest penalties possible for their vicious actions.

The family deserved justice, and I am very glad that the two people responsible are now sitting in prison. However, I cannot see why a civil suit against Carter’s real estate company is justified. This appears to be a way to obtain monetary compensation by targeting a company with deeper pockets than the two people who actually committed the killing.

This case has a very sympathetic plaintiff. Carter was a victim; Carter’s family has surely suffered. Juries are usually moved by such plaintiffs. There is a natural tendency for juries to want to help them by finding liability on the part of the defendant.

And, in hindsight, it is usually easy for juries to find some pretext to give an award. There is always an argument to be made that there could have been more preparation or more training to prevent a death or accident. But that does not mean that such cases have any real merit. This is similar to the infamous “hot coffee” case, where the jury found that the warning on the cup of coffee could have been larger. In that case, the jury decided that the existing warning was simply too small. (I hope it is not bad manners to note that, in the view of many citizens and many courts, it is reasonable to assume that people know that coffee is hot without being given any warning at all.) It is easy to make such arguments in hindsight — in retrospect, a clever lawyer can always make the case that what was done was simply not enough — especially when doing so will help a sympathetic plaintiff.

Judges should, and often do, dismiss weak cases like this before they even reach a jury. Even if such a case is dismissed, however, the defendant is on the hook for legal fees; plaintiffs can impose large costs on defendants by, in effect, requiring those defendants to respond to whatever lawsuit is filed. (Defendants are free to adopt a posture that bears no immediate costs by ignoring any lawsuit that names them; the downside to this strategy is that you automatically lose when you decide not to show up in court.) Even the possibility of this kind of litigation risk costs every business money — a cost which is passed onto insurance companies and consumers, and which dampens economic growth.

The problems that cases like this pose demonstrate the moral and practical importance of tort reform. Something like “loser pays” would be a good deterrent to these types of cases. In such a system, the loser of a lawsuit pays the legal fees originally borne by the winner.

Of course, a “loser pays” rule can be unduly harsh at times, especially when judges rule against litigants who have a reasonable case. I think there is an argument that, in some cases, the incentives that a strict loser-pays system creates are counterproductive. The Advance Arkansas Institute (among others) has championed the view that what is really needed is, at least, a “limited loser pays” system. Under such a system, plaintiffs who bring meritless suits that get tossed out of court still owe legal fees. But under “limited loser pays,” there would be a limit to the amount that lawsuit losers had to pay: the fee-shifting that would be involved would only recoup the difference between a rejected offer and a verdict.

Here is how “limited loser pays” would work in simple terms: suppose that there is a threat of a trial, and that the defendant makes an offer of settlement that is rejected. Suppose further that there is a subsequent verdict and that the plaintiff receives a higher judgment than the settlement offer: the difference between the offer and the judgment would limit the amount that is shifted between the parties. (For example, suppose the plaintiff is injured; the defendant offers to settle for $10,000; there is ultimately a verdict of $30,000. Under a “limited loser-pays” regime, the amount of fees and costs that are shifted would be capped at $20,000.) If you think about it, you can see that this encourages defendants who are legitimately at fault to compensate injured parties at the true level of the injury without wasting time and money on trials, while still discouraging litigation from those with weak legal claims.

Regardless of what you think about this type of tort reform, the real problem in Arkansas is that it cannot even be considered by legislators.

The state Supreme Court, as we’ve written about before, is the only body that can write procedural rules for the court system.

Legislators cannot craft legislative solutions to problems in the legal system that affect the rules of procedure, because of the Supreme Court’s aggressive interpretations of Amendment 80. (And because “limited loser pays” would likely require some formalization of settlement offers, there is no way that such rules can be written without affecting the rules of procedure.) The Supreme Court is certainly not going to write new rules on “loser pays” that have large policy implications. That means nothing will happen on this front until Arkansas gives the General Assembly the power to reform court rules — the same power that Congress and many other state legislatures have. Passage of tort reform next year will rightfully return this legislative power to the Arkansas legislature.