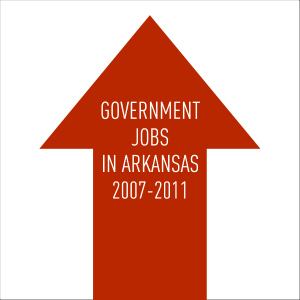 G. Scott Thomas, a number-crunching Poindexter at The Business Journals, has been digging into the Bureau of Labor Statistics data sets so you don’t have to. His mission: To determine the rate of growth in government employment in the states over these last few sad recessionary years.

And where does dear old Arkansas check in in our rankings, friends?

According to the BJ calculations, 22 states and the District of Columbia have more government jobs now than when the recession began. (Unclear from the report: How many of these jobs, if any, are a result of the 2009 economic stimulus package that is in the process of winding down?)

Do keep this chart handy for the next time you hear someone decrying the cruelty of this dark age of austerity, in which government budgets and payrolls at all levels are ostensibly being sliced to the bone.

Go spend some of your time pointlessly playing with the chart, and see how other states stack up (+76,000 government jobs in Texas?! Holy cow!).

Oh, what, like you had something better to do on a Friday afternoon? Shut up, not likely.