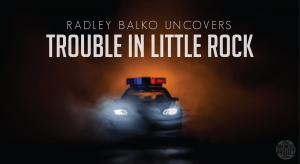 Is there a problem with how the Little Rock police conduct drug raids? According to a recent investigative piece by Radley Balko, there sure is. If he’s right, it should concern every Arkansan who values limited government and liberty.

You may remember Balko from a stop he made in Arkansas in 2015. The Advance Arkansas Institute hosted him for a speech on the militarization of the police. He’s now published an extensive report in the Washington Post that appears to describe some troubling actions by Little Rock police.

Here are some of the potential problems that Balko may have found:

There are three main areas of concern. First, the narcotics unit appears to be routinely violating the Fourth Amendment by serving nearly all of its warrants with no-knock raids. It’s asking for no-knock warrants without demonstrating why each suspect merits a no-knock entry, as required by federal law. Worse yet, Little Rock judges are then signing off on these warrants.

Second, the LRPD is serving many of these warrants by using explosives that SWAT veterans I’ve interviewed say are reckless, dangerous and wholly inappropriate for use in drug raids. I’ve also spoken to at least two people who say there were children in the home when the explosives were used.

Finally, and perhaps most troubling, there’s clear evidence that one informant whom LRPD drug cops have been using — the informant used to obtain probable cause against Talley and others — has been lying to police about his drug buys. At minimum, the detectives who worked with him have been inexcusably sloppy in their handling of him. But there’s also evidence that raises questions about their own truthfulness.

I’d urge every reader of TAP to check out this report and see what is going on in Little Rock. If these abuses are true, there are serious constitutional violations at play, especially if “the LRPD narcotics unit is violating the Fourth Amendment nearly every time its officers serve a drug warrant — and that the city’s judges, the check and balance on police excess, are letting it happen.”

This is a situation that definitely deserves wide attention and greater scrutiny from elected officials.