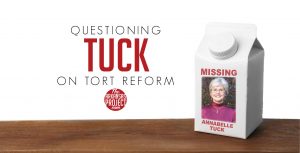 Retired state Supreme Court Justice Annabelle Imber Tuck is taking a tour around the state. She’s not doing so to enjoy the scenery, however; instead, she’s campaigning against Issue 1, the tort reform amendment on November’s ballot.

I’ve read some news stories that cover this tour. In her discussions, Tuck keeps raising some issues that puzzle me. These are the same criticisms of Issue 1 that she brought up in previous comments on the ballot measure. I have tried to contact Tuck over the past few months about her problems with Issue 1. I’ve e-mailed her and left phone messages for her, but haven’t heard back from her. That’s fine – she’s certainly under no obligation to talk to me. But she is doing a lot of talking to reporters. I hope that one enterprising reporter would ask these two questions of her:

Both of these issues have been discussed at length on TAP, but it would be interesting to hear Tuck’s views on them. As TAP readers may recall, prior to the passage of Amendment 80, the legislature did have power to set rules for practice and procedure in the courts. Tuck predicts some pretty dire consequences if Issue 1 is passed. Did these things happen prior to the passage of Amendment 80? If the situation that existed prior to Amendment 80 does not match the bleak future she paints in a post-Issue 1 world, then maybe we should take her “sky is falling” rhetoric with a little bit of salt.

In terms of the role of the legislature in setting court rules, Tuck repeatedly brings up the issue of “loser pays”:

Arkansas currently operates under the American Rule where litigants pay their own legal costs, unless a statute provides otherwise. The proponents, however, want to change to the English Rule in which the loser pays.

This, too, is something we’ve discussed on TAP. To revisit it here: changing from a legal system where people pay their own legal costs, regardless of a trial’s outcome, to one where the loser pays the winner’s costs appears to be to be an issue that should be decided by the legislature. This is not an issue that solely concerns how courts operate; it is, instead, an issue of policy that affects the general public.

Tuck acknowledges that past tort reform efforts have been thwarted by judges who have invalidated it using the idea that such reform is interfering with judicial rulemaking. She approves of this, but I do not. Does anyone outside of the law profession really think that tort reform is merely about judicial rules? Clearly, tort reform has wide public policy implications. It has implications on insurance rates, the availability of health care, and the business climate of a state, to name a few.

Obviously, there are arguments to be made against both a “loser pays” court system and tort reform. These are public policy arguments, however, not solely arguments about legal procedure. These debates should happen in the legislature. They should be made by people elected by the voters of Arkansas. If Tuck is saying that debates about these public policy decisions should be made in the courtrooms by lawyers unaccountable to no one, then I fail to see how this will be persuasive to anyone but attorneys.

I hope that Tuck has a nice tour of the state. I also hope that reporters start questioning her on some of the problems with her stance on Issue 1.