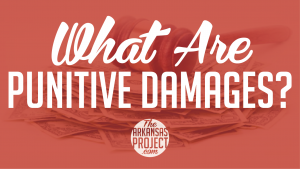 Courts impose punitive damages when a wrongdoer has done something extraordinarily careless or intentionally harmful. The idea of punitive damages is to punish and deter wrongful conduct. When a court grants punitive damages, the damage figures for compensation that are intended to make victims whole are then multiplied by another factor — for instance, two or three — and then the two figures are added to each other. (So, for instance, suppose a judge found that a wrongdoer had harmed someone else by creating $100,000 worth of damages, but because of the wickedness of the act, the judge also decided to impose triple punitive damages: $300,000. This would add up to a total of $400,000 in damages.)

Juries sometimes go overboard in awarding damages, especially in the realm of punitive damages. In the infamous “hot coffee” case in New Mexico, the jury awarded the plaintiff $200,000 in compensatory damages but more than thirteen times that amount ($2.7 million) in additional punitive damages, for a total of $2.9 million. The trial judge found that the jury’s award was so extreme that he reduced both the compensatory damages and the punitive damages so as to produce a sum of $640,000 — a total of less than one-quarter of the original award. The reason that judges sometimes reduce swollen punitive damages is that courts are not supposed to be in the business of overcompensating people for injuries — and, at a certain point, if punitive damages are sky-high, then overcompensation is going to be the result.

Nobody really knows exactly where the United States Supreme Court would set the upper limit of a punitive damages multiplier in any particular case. What we do know is that the courts are wary of excessive punitive damages and are generally ready to rein them in. It is reasonable to argue that SJR 8’s limits on punitive damages at the state level are quite moderate and do not very much change what is already the law of the land. The tort reform amendment’s punitive damage limits will help courts to stay within the mainstream of American law.

One thought on “What are punitive damages, and how does tort reform affect them?”