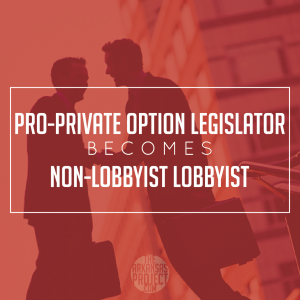 According to Roby Brock at Talk Business, another outgoing pro-”private option” legislator has lined up a “policy consulting” gig in Little Rock.
From Talk Business:

Term-limited State Rep. John Burris, R-Harrison, will join Little Rock-based Capitol Advisors Group – a government relations, public affairs and issue management firm headed by Bill Vickery and Mitchell Lowe.
Burris will serve as a Senior Advisor to the firm beginning in January 2015 and will focus primarily on expanding the group’s health policy consulting practice, both in Arkansas and in Washington, D.C.
“John’s deep command of policy and issues, specifically those related to health care, will have an immediate and significant benefit to our existing clients and will create extraordinary growth opportunities for our firm,” said Lowe.
“John is admired and trusted on both sides of the political aisle. He knows how to get things done in the legislative and regulatory realms and has truly become a thought leader on issues that matter to our clients and the business community,” said Vickery. “We’re beyond excited that he’ll be joining our team.”
In the 89th General Assembly, Burris served as Chairman of the House Committee on Public Health. He was also a principal architect of Arkansas’ Private Option, which utilized Medicaid dollars through the Affordable Care Act to subsidize private health insurance plans for lower income workers. He also pushed for other Medicaid reforms, such as an income verification system, payment delivery changes, and the establishment of private sector principles to make the program more efficient and deliver better outcomes.
Burris served as House Minority Leader during the 2011 Regular Session and 2012 Fiscal Session.
“I am thrilled that I will soon be a part of the Capitol Advisors Group team,” said Burris. “I look forward to bringing my knowledge and experience to the table on behalf of CAG’s clients and to the prospect of growing the firm’s health policy consulting practice.”

One of the most absurd arguments I heard after Obamacare’s passage was that it was dumb for the GOP to say it was hurting economic growth, because Obamacare was actually creating jobs in the legal field due to businesses having to hire more attorneys to interpret the legislation’s effects! Maybe the same will be said about the “private option” in the future: that it created a flourishing cottage industry of government relations, policy consultant, and lobbying jobs for former “private option” architects to fill.