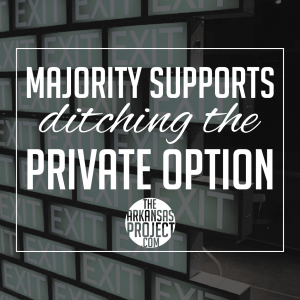 After a midterm election that brought a tidal wave of conservative Republicans into the Capitol, the conversation about Arkansas’s private option has shifted in a much more conservative direction. The conversation used to be about whether there would be changes  to Arkansas’s Medicaid expansion; now it’s about what changes will be made.
A new poll out from the Foundation for Government Accountability (FGA) yesterday gives us a good idea on what changes voters would like made to the program.
From FGA:

The recent election results in Arkansas have made one thing clear: taxpayers want nothing to do with President Obama’s health care takeover. Now, in a new poll released today, an overwhelming majority of Arkansans want lawmakers to wind down the ObamaCare expansion in a thoughtful way that protects patients and taxpayers.
The poll, published today by the Foundation for Government Accountability (FGA), surveyed 650 Arkansans who voted in the November 4th general election. When asked how to roll back the ObamaCare Private Option, 83% of those polled said they support freezing enrollment in the program; a staggering 57% support freezing enrollment and implementing a definite end date for the program.
The Private Option – which gives taxpayer-funded welfare to able-bodied, childless adults – has failed to deliver on the promises its cheerleaders have made. It has prioritized able-bodied adults over the truly needy in the Medicaid program and has been over budget every single month since it launched in January, putting Arkansas taxpayers at risk of owing millions in paybacks to Washington. Taxpayers are ready to roll back the disaster before things get even worse.
If policy failures and electoral disasters aren’t enough to convince the Arkansas legislature to act, FGA CEO Tarren Bragdon is hoping the new poll will:
“How much more evidence does the legislature need before it rolls back this Private Option Medicaid expansion? Voters sent a clear message in November when they elected Asa Hutchinson, Tom Cotton and the largest Republican legislative majority in modern history.  They’re counting on their elected officials to undo ObamaCare in all its forms and at all levels of government.
The question now is, ‘How will Arkansas roll back its ObamaCare disaster?’ Arkansas is the only Southern state to have embraced ObamaCare expansion. Now, voters want their elected officials to make Arkansas the first state to escape ObamaCare expansion once and for all.”

It’ll be interesting to see if Republican legislators in 2015 will listen to the overwhelming majority of Arkansas voters — who want large changes made to the “private option.”
P.S.: Obamacare architect, Jonathan Gruber, was in the news yesterday again for all the wrong reasons. In a 2013 speech at the University of Pennsylvania, he said the hopes for the “private option” to be budget neutral were “mathematically impossible.” If you’ve been reading our blog, you already know that to be the case.