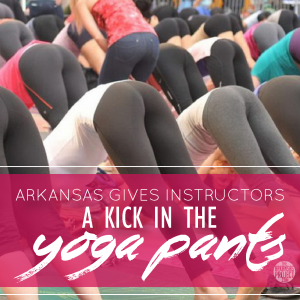 Did you know that somewhere out there in Arkansas a yoga instructor may be teaching without licensed permission from a state bureaucrat? The horror!
From Arkansas Online:

After almost six months of back-and-forth with a state regulatory agency that wants to license them, schools that train yoga instructors are now taking their fight to the Arkansas General Assembly.
Legislators are crafting a bill to change the code governing the state Board of Private Career Education–the group that oversees private postsecondary career schools for fields, such as real estate, bail bonds, and tattooing and body piercing.
The legislation would add language preventing the board from exerting its authority over yoga teacher-training schools as well as other instructor-training programs such as horseback riding, physical fitness, martial arts and dance, which Sen. Uvalde Lindsey, D-Fayetteville, said are “avocational and recreational” and therefore should not be regulated by the state.
The director of the state Board of Private Career Education maintains that licensure is necessary to protect the consumer–both the students going through the schools to become instructors and the everyday yogis who seek safe, quality classes from well-trained teachers.
But owners of the schools and the legislators working on the bill argue there have been no complaints recorded about the state’s yoga teacher-training schools, and that the board’s move is an example of a government entity overstepping its bounds.

This is another example of state government thinking that — since they must regulate some industries — therefore, they should regulate all industries.
In short, I’m not sure I see the need for taxpayer resources to be spent on regulating yoga instructors. What great danger is the state attempting to protect students of yoga from? Perhaps somewhere out there in West Little Rock there’s an instructor who erroneously tells students to inhale (spoiler alert: you’re supposed to exhale) and twist toward the inside of the right thigh while completing the “Half Lord of the Fishes” pose.
However, the answer to this problem isn’t for bureaucrats to promulgate books of regulations onto an entire recreational industry. The solution is for students to find another instructor.
This regulation is another instance of state regulators making it harder for people in what was once the Land of Opportunity to work.
In our recently-released Action Plan for Arkansas, we recommend legislation that would require state bureaucrats to provide justification for a regulation and prove that they had a “compelling interest” to protect the public’s health and safety.
This would allow yoga instructors and other industries to practice their craft in peace, free from overeager state regulators.

One thought on “Over-Regulation Puts Yoga Owners In Awkward Position”