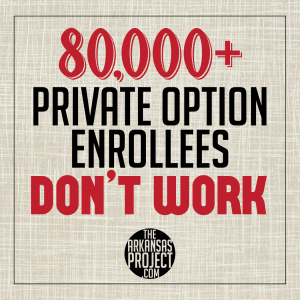 One of the many misleading talking points promoted by pro-”private option” advocates is that the program isn’t an entitlement — and that it only benefits “working” Arkansans.
From lobbying talking points from AARP:

…we need your help to preserve (the “private option”), so nearly 250,000 hard-working Arkansans can get affordable health insurance coverage—and thousands of Arkansans don’t lose it. Tell your State Representative to vote YES on keeping the Private Option!

Like a bad penny, it turns up again in this article from HealthCare Payer News:

Arkansas Governor Mike Beebe has signed a new law expanding Medicaid eligibility through the state’s federal-partnership health insurance exchange — one of the most unusual evolutions in Affordable Care Act policy, if also one HHS hopes will bring insurance to some 250,000 working class Arkansans who otherwise might continue to go uncovered amid the politics of Medicaid expansion.

However, according to e-mails from state officials recently shared with The Arkansas Project, this talking point is demonstrably false.
According to a November 2014 e-mail from Susan Burton, a program eligibility analyst at the Arkansas Department of Human Services, in response to state Sen. Bryan King’s inquiry about PO enrollees who have no income: 80,296 enrollees don’t work and make nothing in annual income.
Those 80,296 people comprise more than 37 percent of the roughly 215,000 enrollees as of November 2014.
That means that more than a third of enrollees in this program for “hard-working Arkansans” don’t work at all.
There’s no way to tell what exactly will happen with Arkansas’s “private option” Medicaid expansion in the coming months during the 2015 legislative session. Perhaps we can hope that, this time, “private option” advocates won’t be able to get away with misleading the public by telling them that the program only helps the “working class” in Arkansas.