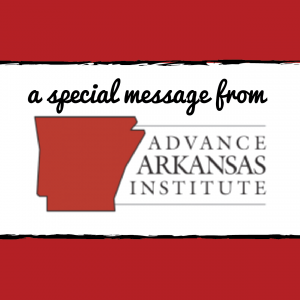 Now it’s time for us to go all PBS on you.
We’ve had a busy and successful year promoting conservative solutions, but we don’t take government grants and we can’t ask George Soros to pay the bills. Instead, we ask our members — freedom-loving conservatives like you — to help us out with a donation. If you haven’t already, why not become a member of the Advance Arkansas Institute?
Unlike the other gifts you’ve given this year, your gift to the Advance Arkansas Institute — which produces this blog — will be fully tax-deductible.
We so appreciate the gifts of conservatives in Arkansas that allow us to keep our state moving in a conservative direction, and we’re excited about the possibility of greater successes in 2015. Here are some of the Advance Arkansas Institute’s accomplishments over the past 12 months:
During the 2014 session, we worked to research and publicize the dangers of Medicaid expansion in Arkansas, even as other conservative groups stood mute on the biggest expansion of state government in modern history; we collaborated with representatives from the Oklahoma Center for Policy Analysis and the Foundation for Government Accountability to hold a series of town halls across the state about the misnamed “private option.” AAI published several short papers evaluating Medicaid expansion, as well as a longer study: The Cure Is Worse Than the Disease: Why the Private Option Will Hurt, Not Help, Arkansas Hospitals. One Republican legislator who advocated Medicaid expansion circulated a private letter to all 50 of his Republican colleagues, claiming AAI’s study was defective and that Arkansas nonprofit hospitals were “losing BIG money.” AAI responded with a brief report showing that, with the figures that this legislator supplied, simple math demonstrated those hospitals to be reaping, on average, a one percent profit.
AAI and its journalism program, The Arkansas Project, continue to be authoritative sources for facts and statistics. In the state’s recent primary elections, all four candidates in two hotly contested state senate primaries (Phil Grace, Sen. Bruce Holland, Sen. Missy Irvin, and Rep. Terry Rice) relied on our research and our reputation as honest brokers in their public statements or direct mail. Other candidates used our research to demonstrate their conservative bona fides in the recent general election, such as Senator-elect Blake Johnson. The Arkansas Project also broke news regularly; we revealed, for instance, that one northwest Arkansas primary legislative candidate was using a fraudulent college degree as a credential. (Thankfully, that candidate lost.) We coauthored several papers with the Foundation for Government Accountability on Medicaid reform; Institute staff also collaborated with Conduit for Action to produce a voter guide; AAI staff were also frequent radio and television guests.
In the fall, AAI rolled out its iPhone app, which enables observers of the Arkansas legislature to follow developments there at the touch of a button. For each one of Arkansas’s 135 legislators, app users can look up (by name or zip code) nearly 100 votes on different bills during the previous legislative session, the text of those bills, a district map, a personal legislative webpage, and 14 different ratings on legislative performance. For each of those ratings, the app also displays comparative rankings, so that users can see how one legislator compares to others. It also lists the awards that several legislators received for their comparatively superior performance in the previous legislative session. The app uses the data from our biennial Freedom Scorecard, which lists and rates the voting records of all Arkansas General Assembly members. That report, the most thorough of its kind ever produced in Arkansas, gives each legislator a set of vote ratings. In next year’s session, our app will provide users with real-time updates on legislative developments.
The Advance Arkansas Institute continues to be seen as an idea factory for conservatives. Because we have spent significant time building relationships with legislators and other decision-makers, and because of the extraordinary success of conservative candidates during the 2014 elections, we are in a unique position. We intend to be vigorous and effective advocates for a well-researched, intellectually serious, reformist, free-market conservative agenda focusing on health care reform, tax relief, and economic growth. (For more details, see our Action Plan for Arkansas 2014, a 200-page book of policy recommendations which we just published.) We only published the Action Plan a few weeks ago, but we’ve already received requests from legislators to help them draft legislation for the forthcoming session that will realize many of the ideas in the book. Right now, at the request of legislators, our team is drafting plans for tort reform, deregulation, health insurance access, student rights, religious freedom, property rights protection, civil rights, open government records, and protecting the First Amendment.
Because of the power of technology, one of our most important programs is also one of our cheapest. We send out a weekly email newsletter to our supporters, to the news media, and to other think tanks that explains and reproduces the work we do – and we place a premium on having a clean and accessible website that is a repository for all of our research. We regularly receive compliments for the accessibility and transparency of our work. Make sure to let us know if you’d like to be on our weekly email list.
It is because of the support of our friends who love liberty that we are able to advance the values we share. We are very grateful for the support of our members, and we look forward to participating in a 2015 legislative session which advances the values of limited, transparent, and conservative government. Because of the growing impact of conservative ideas and values in our state’s legislature and executive branch, there is every reason to believe that 2015 is going to be a great year.
We respectfully ask you: if you’d like to contribute to the fight for liberty in Arkansas, please donate here.