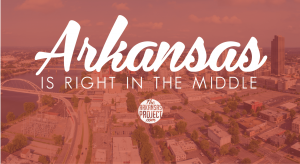 When it comes to fiscal health, Arkansas ranks in the middle of the pack – literally. The Mercatus Center at George Mason University recently released its state fiscal condition rankings. Arkansas came in at 25.

On the basis of its solvency in five separate categories, Arkansas ranks 25th among the US states for fiscal health. Arkansas has between 3.17 and 4.14 times the cash needed to cover short-term obligations. Revenues exceed expenses by 4 percent, with an improving net position of $248 per capita. In the long run, Arkansas has a net asset ratio of 0.11. Long-term liabilities are lower than the national average, at 35 percent of total assets, or $2,986 per capita. Total unfunded pension liabilities that are guaranteed to be paid are $48.17 billion, or 41 percent of state personal income. OPEB are $0.12 billion, or less than 1 percent of state personal income.

Ranking 25th is not too bad, although it is not that great, either. The state has a long way to go to ensure that taxpayers are protected from a fiscal crisis. However, plenty of states are in worse condition. Illinois, for instance, ranks last due to the inability of the governor and legislators to pursue sensible fiscal policies that prioritize the state’s long-term condition over short-term political gain.

Arkansas lawmakers would do well to check out the Mercatus Center’s in-depth state profile. Voters should, too. This is good information to have during the final weeks of campaign season as you evaluate who should lead the state into the future.