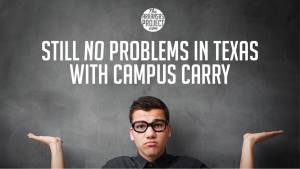 It’s been one year since “campus carry” was implemented in Texas — and its flagship university hasn’t seen a rise in gun shootouts in classrooms and libraries.

From the Austin American-Statesman:

University of Texas police responded to four gun-related incidents in the past 12 months, but only one — involving a photo shoot for a newspaper — can be tied to the controversial state law permitting students to carry concealed handguns in most campus buildings.

Campus carry went into effect Aug. 1, about two weeks before the fall semester opened at UT. Opponents of Senate Bill 11 feared there would be a rise in gun-related violence at the campus.
But as the one-year anniversary approaches, those concerns have been unfounded.

Of course, opponents of legislation expanding Second Amendment rights onto government property in Arkansas made similar claims during the previous legislative session.

The “enhanced carry” law passed in the 2017 session allows anyone with a concealed carry license (CCL) to carry a weapon on campus and other state-owned properties like the State Capitol. CCL holders would be required to receive “up to” 8 hours of additional training before being able to legally carry in these places.

One opponent of the 2017 law was University of Arkansas Police Chief Steve Gahagans, who testified against the legislation in January before a House committee. His argument was that concealed carriers don’t have the same level of training as law enforcement. Therefore, someone carrying on campus might accidentally shoot an innocent victim.

However, this argument has startling implications. Presumably, you’d have to be in favor of abolishing all forms of private gun ownership statewide, once you assume Gahagan’s premise: namely, that a career in law enforcement is truly a prerequisite for responsible gun usage.

It’s easy to make emotional claims about expanding Second Amendment rights leading to more tragedies. However, the concealed carry law passed by Arkansas legislators in the 1990s has brought no uptick in such tragedies. “Campus carry” in Texas hasn’t either, a year after it was implemented. I suspect that a year from now we’ll be saying the same about the “enhanced carry” law passed during the 2017 legislative session.

To believe otherwise is to believe that gun owners are somehow less responsible than our neighbors in Texas. Or that licensed Arkansans IQ suddenly drops when they step foot on government property.

Act 562 goes into effect on September 1.