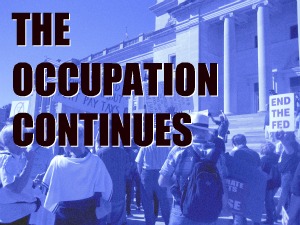 For those who care about such things, the Occupy Little Rock group, which has been camped out outside the Clinton library for several days, will abandon their post today.

They’ll evacuate the Clinton Presidential park around 6 p.m.; shortly thereafter, they’ll begin occupying a lot that the city of Little Rock has offered them between I-630 and the Capitol Avenue post office.

I stopped by the camp today and spoke briefly to one of the Little Rock Occupiers (who stressed that he spoke only for himself, because Occupy Little Rock has no official spokesperson), who called the move a “tactical retreat.” He said the group’s General Assembly had debated yesterday for five hours whether to move to the lot that the city had recommended; finally, he said, the Occupiers had reached a “92% consensus” to move its location. (This brings to mind what Oscar Wilde once said was the problem with politics: too many meetings.)

When the Occupier asked what he thought about the acts of the Little Rock police, who announced the deadline for the move, he said that Chief Stuart Thomas was “simply enforcing the law as he interprets it” and that “he has been very reasonable.”

I suspect I am not the only observer to wonder exactly what progress is being made by a bunch of people camping out in a park or in a vacant lot. What is Occupy Little Rock trying to accomplish? How will Occupy Little Rock know it is making progress?

The Occupier had an answer ready: “We’ll know when we get there.” That was either a spot-on literary allusion, or totally my imagination.

Shortly after I talked to him, the Occupier called back and asked that I not use his name. I’ll respect that.