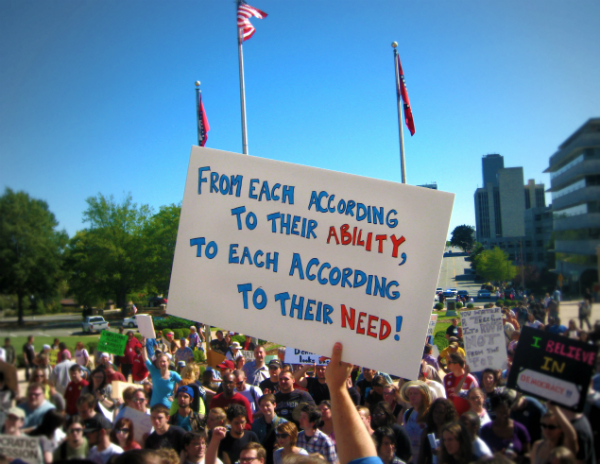 Well, Little Rock, I have news for you…you are now officially an occupied territory.

The Occupy Little Rock demonstration, a localized offshoot of the Occupy Wall Street movement, hit the streets of downtown Little Rock Saturday morning to push their message of fighting corporate power.  John Lyon from  the Arkansas News Bureau was on scene and he contributes a fine write-up of the affair.

Yeah, there was some of the usual alienating leftist claptrap—perhaps too much for a movement that hopes to reach out to “the 99 percent” of mainstream Americans who aren’t billionaires. And so you had the goofy chants (“Humans first! Humans first!”) and declarations of “Solidarity!” You had the unfocused, catch-all list of grievances (one speaker listed the societal ills we can lay at the feet of “the 1 percent,” which includes not only the rotten economy but also “watered-down” health care reform and child obesity).

There was the odd dynamic whereby each speaker approached the microphone, introduced him or herself by first name, and the crowd greeted them by name, which gave the event the feel of a giant open-air 12-step recovery meeting. There was the punctilious campus organizer’s obsession with ensuring equality of form, since according to the rules, each male speaker had to be followed by a female speaker “to keep it fair.”

But on the plus side, all the participants were perfectly pleasant, organized, polite and well-behaved, with one speaker reminding everyone to pick up any trash they might see as they departed the Capitol. While there was plenty of sharp rhetoric directed at reining in overweening corporate power, the overall vibe was positive and even kind of cheerful. The turn-out of some 400-500 people was impressive (though the demonstration would have packed greater punch on a weekday).

At least one speaker, who chided himself and the crowd for their past “apathy” and urged everyone to read the Constitution, was touching on sentiments that wouldn’t have been out of place at a Tea Party rally two years ago. In fact, as the group marched its way to the Capitol, I was delighted to spot Rob Richard, a tireless libertarian activist and Ron Paul enthusiast who’s a long-time favorite of The Arkansas Project, hoisting an “End the Fed” sign.

Is there a potential for this movement to grow into something more consequential? It’s certainly possible, though I don’t believe “left populism” is as easy a sell as left-leaning populists like to think. That said, I’ve grown hesitant about dismissing grassroots organizing and mass dissent, since in the last decade they’ve shown a capacity for achieving an impact far beyond their initial expectations (like the aforementioned Tea Party movement, or the 2003-2004 Howard Dean primary campaign, which sowed the seeds for a liberal resurgence in 2006 and 2008).

Meanwhile, here’s one blogger who sees the potential for a alliance between anti-corporate Occupiers and anti-government Tea Partiers that reaches beyond tired left and right categories. He correctly diagnoses that the root of the problem isn’t just corporate power or government power, but the unholy collusion of the two:

Of course, for an alliance to happen, the dude with the Karl Marx quoting sign in the banner photo above probably oughta cool it. That ain’t exactly a message with mass crossover appeal.

Boycott foreign products/Buy American Made Only

A corporation cannot  have a grandchild

Separation of corporation and state

Dissent is the highest form of patriotism

Single-payer Medicare for all

“Corporation” isn’t in the Constitution

Check out more photos from the Arkansas Times.