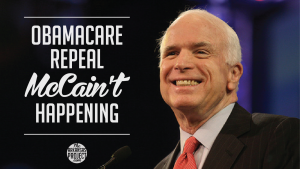 Earlier this week, we wrote about the newest version of Obamacare reform — the Graham-Cassidy legislation that is likely to come before the Senate next week.

The legislation does keep some of the Affordable Care Act in place, but it also repeals the employer and individual mandates while block granting federal funds for health care to the states.

John Boozman and Tom Cotton are supportive, as is Gov.

They’ve all caught flack in the media from the usual suspects for their support this week, but none of them have backed off their previous statements in favor.

Graham-Cassidy satisfies my concerns, and I believe it is a true repeal and replace bill that offers states the flexibility the governors have requested in a block grant format for some time now.

Unfortunately, it looks like this latest attempt at reforming our healthcare system is doomed to fail again.

That’s because one of the undecided Republican Senators needed to pass the legislation announced today that he won’t vote for it.

As I have repeatedly stressed, health care reform legislation ought to be the product of regular order in the Senate. Committees of jurisdiction should mark up legislation with input from all committee members, and send their bill to the floor for debate and amendment. That is the only way we might achieve bipartisan consensus on lasting reform, without which a policy that affects one-fifth of our economy and every single American family will be subject to reversal with every change of administration and congressional majority.

McCain was one of the votes against previous Senate legislation to reform Obamacare in August.

McCain’s decision means two other undecided lawmakers — Sens. Susan Collins and Lisa Murkowski — will both have to vote in favor of the legislation, or it won’t have enough votes for passage.

There are legitimate reasons to be skeptical of this legislation, but McCain using legislative process excuses as his main reason to vote against it strikes me as particularly lame.

I don’t remember Republicans campaigning on Obamacare repeal for the past seven years being all that explicit about what order it went through the legislative process.

If another bill reforming health care dies in the Senate next week, good luck to all those Republicans up for reelection in 2018 and 2020 who will have to tell voters they couldn’t follow through on campaign promises because regular order got changed and some bills didn’t go through the proper committees of jurisdiction.