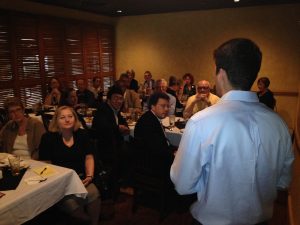 The National Taxpayers’ Union hosted a luncheon in Little Rock yesterday, in conjunction with the Advance Arkansas Institute. A large crowd — including two state senators, two state representatives, and two Quorum Court members — convened to hear from NTU’s Lee Schalk and AAI’s Dan Greenberg on the federal sequester and federal budget policy.
In his remarks, Schalk emphasized that the sequester on the federal budget is working. In fact, federal spending is down from $3.6 trillion in 2011 to $3.45 trillion in 2013.
All the while, the federal government is continuing to waste money on things like:

So it would seem there is still some room to cut. However, Schalk warned that there is an effort underway to reverse the sequester and increase federal spending once again, despite significant amounts of continuing federal spending.