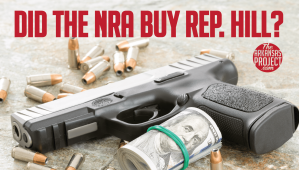 If you read some news stories, you’d think that Rep.

French Hill is the Congressman from the National Rifle Association (NRA). He is portrayed as being the recipient of over $1 million in NRA donations, which means (of course!) that the NRA controls him.

I think that this rush to judge Rep. Hill guilty of being an NRA stooge is a bit absurd. First off, Rep. Hill did not receive $1 million in NRA donations. Secondly, the NRA’s support does not mean that they have “bought” Rep. Hill. The press hubbub about the NRA and Rep. Hill is a good case study in how the media misunderstands and misinterprets the political process.

Take the quote from the Arkansas Times: “…Congressman French Hill of Little Rock was the No. 1 career recipient of NRA campaign contributions in the House.” According to the blog Money and Career Cheat Sheet, “The group pays handsomely to make sure gun laws are loose” by giving to politicians like Hill.

One media outlet that did some good reporting is the Democrat-Gazette.

Its story on this issue noted that Rep. Hill only received $3,000 from the NRA in direct donations. According to Hill challenger Gwen Combs, “I think it’s deplorable to accept funding from the NRA.” Maybe Combs really thinks that it is deplorable to accept any money from the NRA, but if the size of the contribution is relevant, it’s worth noting that $3,000 really isn’t very much when it comes to a congressional campaign.

Furthermore, as the Democrat-Gazette pointed out, the situation is a little more complicated than Rep. Hill simply accepting NRA donations. Much of the NRA’s support for Rep. Hill and other members of Congress comes in the form of independent expenditures. These are campaign activities that are conducted independently of campaigns. They cannot be coordinated with a candidate’s campaign.

So when the NRA is supporting Rep. Hill with independent expenditures, they are doing so without Rep. Hill’s permission. He is not “accepting” this funding from the NRA. He could not turn the NRA’s help down if he wanted to, because the organization did not ask his permission to conduct their activities. It is illegal for these independent expenditures to be coordinated with candidates. In short, anybody who calls these “contributions” is radically uninformed. They are campaign contributions to French Hill only in the sense that Arkansas Times editorials are campaign contributions to Hill’s opponents.

Did the NRA provide this support to “buy off” Rep. Hill? That seems unlikely. As the Democrat-Gazette reports, the organization provided this support in 2014 for two reasons: 1) because French Hill answered its questionnaire in a way that let the NRA know that Hill supported gun rights, and 2) because Hill’s challenger implied that he had the NRA’s support when he didn’t, thus enraging the organization’s leadership.

Part of the NRA’s campaign to support Hill was to defeat his opponent and send a message to other candidates that they should not trifle with the organization. But the other reason that the NRA supported Hill is that Hill supported the same position as the NRA. That is how political donations work. They do not buy a politician’s support for a certain position; instead, donations from people or organizations who hold a certain position go to politicians who hold the same position (this is in general, of course – one can always find examples of politicians who do indeed trade votes for donations, but this is not the norm; indeed, politicians who do this go to jail).

The NRA supports politicians who oppose gun control. French Hill opposes gun control. It is no surprise that the NRA supports him. Given that his 2014 opponent also made the NRA leadership angry, there really should be no shock that Rep. Hill is one of the top beneficiaries of NRA spending.

You can dislike Rep. Hill’s stance on gun control if you want. You can also like the NRA. But the idea that the NRA is paying off Rep. Hill and other pro-gun elected officials is ridiculous. Any media figures who say or imply something to the contrary have demonstrated, on their part, either notable ignorance or notable dishonesty.