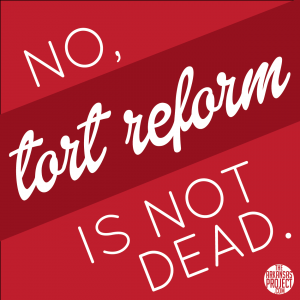 The new year is here, and the overheated reaction to civil justice reform from the left has already begun.
One judge in Conway got pressured into a plea bargain, so now every policymaker and political contributor in Arkansas should just give up on tort reform — or so says the Arkansas Times, in a series of articles that are short on argument and long on innuendo.
From the Arkansas Times:

The Mike Maggio case ought to kill tort reform this legislative session at least.
Really. Does Republican Sen. Eddie Joe Williams want to push former Republican senator Gilbert Baker’s long and well-paid work to fruition with a constitutional amendment to make it harder to sue nursing homes, such as those owned by Michael Morton, and harder to collect big judgments and punitive damages.  After this?

The Arkansas Chamber of Commerce has already committed publicly to getting tort reform through the legislature. I’d say the liberal dream of tort reform being dead is just wishful thinking.
Conservatives know that making reforms to Arkansas’ civil justice system would increase access to health care in rural areas and supply an added incentive for businesses to locate, and create jobs, in the state.
When state Rep. Hudson Hallum — a vote fraud practitioner — got sentenced for his crimes, it is a curious fact that the Arkansas Times strenuously avoided drawing larger conclusions about the importance of stopping vote fraud legislatively. Indeed, the tabloid did its best to explain that the vote fraud Hallum participated in was nothing at all like the vote fraud that a voter ID requirement would stop. We thought this argument was a non sequitur, but we had a certain admiration for the doggedness with which the Arkansas Times made it.
Now, of course, it is 2015. Trial lawyers across the state have regularly flooded state legislative campaign accounts with donations; like clockwork, those state legislative candidates have stood in the way of tort reform. What a mystery it is that the trial lawyers who have en masse donated to candidates who oppose reform of our legal system have (as far as we can tell) been the subject of zero journalistic exposes: it is only the advocates of judicial reform and the recipients of their donations that have been the targets of Brantley’s accusations of “dirty money.” In its own way, the brazenness of our local tabloid’s selective outrage is impressive.
We’ll have more on the Maggio case later on. Although we appreciate that Max Brantley would like to use Maggio’s plea bargain to beat up on several of his favorite punching bags, those who actually read the plea bargain will note that it contains little that reflects badly on anyone — except, of course, for ex-Judge Mike Maggio.