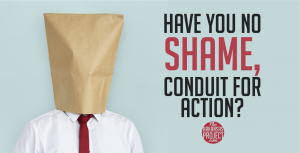 Making false accusations against political opponents is nothing new in American politics. The smear, as it was once known, has a long history. I’ve even been smeared a time or two myself.
So while I’m used to it and am not surprised when it happens, I don’t like it. And it’s still wrong to do.

Too bad Conduit for Action doesn’t think the same way. Whoever wrote a recent commentary about nursing homes and tort reform likes to smear people. That author appears to be targeting me with a blatant falsehood — accusing me of being financially supported by nursing home owner Michael Morton.

If it is, then this charge is false. If it is not, then Conduit should name the blogger in question and provide evidence for the charge.

Not that I should have to do so, but I will state this clearly: I have never met or spoken to Michael Morton. He has never paid me a dime. I have never received a check, cash, or any other financial support from him. If I saw him on the street, I wouldn’t recognize him; I don’t know what he looks like.

In fact, because of other positions that I hold, I must file financial disclosure documents with the government detailing where my wife and I receive our income. Those documents are publicly available and a matter of public record. Anyone can look through them. Anyone who does so will not find any mention of Michael Morton.

What I write on TAP is my opinion. I believe in tort reform. I think it will improve the Arkansas economy, and I have laid out my reasons for thinking that. Someone can disagree with that reasoning, and that’s fine. Having a principled debate over this (or any other topic) is the essence of the American political system. But it goes beyond the pale of reasonable debate to argue (as Conduit has repeatedly done) that those who support tort reform are doing so because they are paid off.

This recklessness is par for the course with Conduit for Action. As I’ve discussed in the past on TAP, Conduit has a history of shady action, personal attacks, and shifting ideology on tort reform. Maybe that’s why I’ve drawn the ire of the nameless writer on that site. If so, then a better way of dealing with my blog posts would be to refute them through reasoned argument. Of course, it is easier to make up false claims that pro-reform advocates are paid off by special interests. Obviously, questioning my motivation is a lot easier than refuting my arguments. That just indicates how unprincipled Conduit is when it comes to opposing tort reform. This supposedly conservative organization has taken the path of accusing its opponents of being paid shills rather than using arguments and facts to justify its support of the liberal agenda on tort reform.