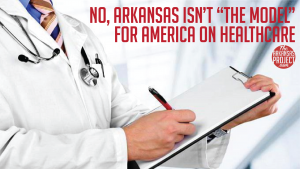 Should America emulate Arkansas’s expansion of Medicaid through Obamacare?
That’s what State Rep.

Michael John Gray, the chairman of the state Democratic Party, said in a recent email to supporters.

Gray linked to a recent op-ed by former Gov.

Rather than dictating priorities from the Capitol, Washington must start by listening to the states. For governors and local lawmakers, health care is not an ideological abstraction or political prize. Health care is one of the most sensitive, important parts of their neighbors’ lives. And because state budget rules are far more restrictive than federal ones, governors cannot simply throw money at a problem.

It is no surprise, then, that governors and state legislatures across the country have found innovative, bipartisan ways to expand coverage and control the cost of care. Take what happened in our shared home state of Arkansas. Even before the Affordable Care Act we understood that we had to confront the challenge of runaway cost increases. Specifically, we had to do something about a fee-for-service system, one where doctors were paid for doing more, rather than creating better outcomes.
Changing such an entrenched arrangement was not easy, and our state’s work is far from finished. But in less than a decade, we’ve made remarkable progress. We brought public and private-sector insurers together around a common set of goals, providing clarity and certainty to hospitals, doctors, and patients alike. We shifted incentives for health-care providers: if an Arkansas hospital can reduce costs while maintaining quality of care, we split the savings 50-50. And we used ACA funds to create a program that covers as many (perhaps even more) people than Medicaid expansion would have, but is run entirely by the private sector.

Unfortunately, I’m not as confident as Gray, Beebe, and McLarty that Arkansas’s Medicaid expansion is something the rest of the nation should emulate. Indeed, independent auditors for the federal government noted in 2014 that Arkansas’s expansion was much more expensive for federal taxpayers as compared to the costs of expansion in other states.

The Government Accountability Office (GAO) said in 2014 that the federal government’s approval of Arkansas’s Medicaid expansion plan could lead to “significant cost implications” for federal taxpayers.

HHS’s approval of $778 million dollars of hypothetical costs in the Arkansas demonstration spending limit and the department’s waiver of its cost-effectiveness requirement is further evidence of our long-standing concerns that HHS is approving demonstrations that may not be budget-neutral. HHS’s approval of the Arkansas demonstration suggests that the Secretary may continue to approve section 1115 Medicaid demonstrations that raise federal costs, inconsistent with the Department’s policy of budget neutrality. Moreover, the additional flexibility granted to Arkansas and 11 other states to increase the spending limit if costs prove higher than expected sets another precedent, further eroding the integrity of HHS’s process. If, as it did with Arkansas, HHS allows states to use an approach to expanding Medicaid that is expected to cost more than expansion under the existing Medicaid program with fewer cost controls in place, there could be significant cost implications for the federal government. Efforts to ensure cost effectiveness and budget neutrality in Medicaid expansion demonstrations have even greater fiscal implications given that states that choose to do so will receive enhanced federal funding for the newly eligible population.

Basically, the feds are saying: God help us if the rest of the nation decides to emulate Arkansas’s approach to Medicaid expansion. These states might see more federal funds flowing into their health care systems, but it’s the taxpayers who would be footing the bill for higher-than-expected costs.

Arkansas’s Medicaid expansion is another example of the problem of the “seen and the unseen” in politics. Too often, politicians are quick to brag about the “seen” benefits of a new welfare program while ignoring the “unseen” costs of funding such a program.

Beebe and McLarty see Arkansas’s Medicaid expansion covering a newly-eligible population of over 300,000, but they are apparently blind to the warnings from the federal government about the cost overruns of the program and the implications of that for taxpayers.

Furthermore, it’s not clear that putting hundreds of thousands of new Arkansans on Medicaid expansion has done anything to improve health outcomes in our state. Arkansas still ranks as the 48th healthiest state in the nation, according to a 2017 study by United Healthcare. Medicaid expansion didn’t move the needle in terms of results, but it sure did in terms of costs — the unique characteristics of the “private option” made expansion 19% more costly than it would have been if Arkansas had just carried out traditional, plain-vanilla Medicaid expansion.

In short, Arkansas lawmakers — through Obamacare — created a program that’s been much more expensive than expected, but that hasn’t significantly improved health outcomes in the Natural State. That’s not a model for the rest of the nation to follow.