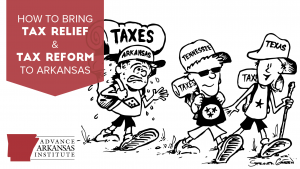 Members of the Arkansas Tax Reform and Relief Legislative Task Force have a little over one year left to submit a written report to Gov.

They might find a new book from the Advance Arkansas Institute (AAI) valuable: it outlines the depressing reality of the higher tax burden Arkansans bear, compared to their neighbors in surrounding states.

Marjorie Greenberg, the report’s author, encourages lawmakers to increase the transparency of tax expenditures, reform the state’s budget process, and limit the spending of state government.

Greenberg is the former budget director for Gov. Hutchinson.

These recommendations are triple-edged: they provide policymakers with more information; they establish better tax and budget processes; and they create a smaller and smarter government. These reforms are aimed at making Arkansas a better place. If enacted, they will produce a state government that spends and taxes less and delivers more; these reforms also will (not incidentally) improve the job prospects, the take-home pay, and the well-being of our citizens by encouraging business to invest in Arkansas.

True tax relief in Arkansas will only be accomplished if it’s accompanied by budgetary reform, according to the report. Therefore, the task force should examine ways to reduce spending to compensate for revenue decreases from tax relief, Greenberg says.

The report is already receiving praise from some elected officials.

Lt. Gov. Tim Griffin said of the report today in a statement:

The Advance Arkansas Institute’s report on tax relief and budget reform is a must-read: it is a wake-up call for anyone interested in growing good-paying Arkansas jobs in an increasingly competitive environment. This report is a thoughtful, insightful, and well-timed analysis of our current situation. It is the perfect place to begin any conversation about Arkansas’s future.

You can read the full AAI report here.