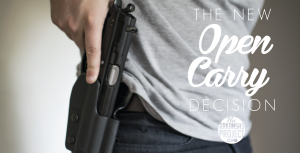 Attorney General Leslie Rutledge recently reiterated her view that the Second Amendment requires a state to afford its citizens either the ability to open carry a weapon without a license, the ability to carry a concealed weapon without a license, or both.  She’s right, and now a conservative judge from a conservative three-judge panel of the most liberal court in the country, the Ninth Circuit Court of the United States Appeals, said so.

In that case, an individual challenged Hawaii’s restrictive gun laws – that state has a very narrow concealed-carry regime and no open carry.  That case was appealed from the trial court to the Court of Appeals. When a case goes to the appellate court, it’s heard by three judges randomly picked from the entire roster of the dozens of judges on that court, both those considered “active” and those who have, after years of service, taken senior status and a reduced caseload.

Judge O’Scannlain, a Senior Circuit Judge, born in New York 81 years ago, whose chambers are in Portland, Oregon, penned a blistering yet simple opinion that highlights the basic text of the Second Amendment.  That Constitutional provision, second only to the First Amendment, O’Scannlain highlights, should not be a second-class amendment. It has been, but no longer.

The Second Amendment offers law-abiding citizens the right to both keep and bear arms.  For both terms to have meaning, O’Scannlain persuasively explains, that bundle of rights must include more than keeping a gun in the home.  What’s then also guaranteed? Well, it’s the right to bear that arm, i.e., the right to carry a firearm on one’s person. Since most states have regulated the concealed carrying of firearms, that leaves open carry.  The Constitution guarantees that right, says O’Scannlain.

What’s next?  Unfortunately, most of the Ninth Circuit is leftist.  And if a majority of the active judges of the whole court don’t like what any three-judge panel decides, they can choose to revisit the case.  I predict that will happen here, and the entire court will abandon O’Scannlain’s opinion (which was joined by another conservative judge, Sandra Ikuta, to create the 2-1 decision).

Then, I believe, the case will be appealed to the Supreme Court.  The Supreme Court, however, is the only court that decides whether or not they’ll hear a case.  I think they will do so here and that they will reverse the Ninth Circuit Court of Appeals, the most reversed Circuit, in part with the support of what will be Justice Kavanaugh.

Thus, I predict that in the end, O’Scannlain’s and Rutledge’s views will be settled law.